We need batteries that store more, last longer, and are safer to use 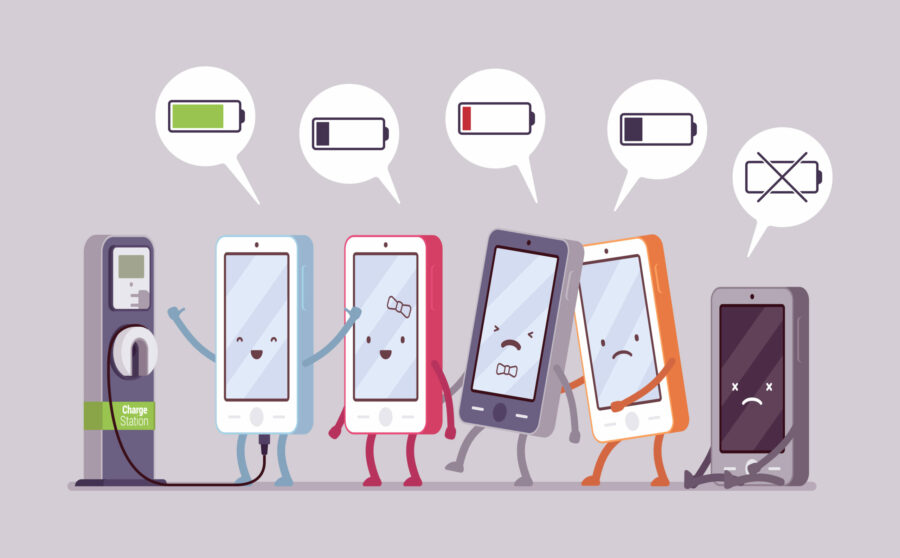 Your phone battery is about to run out and you can’t find a place to plug it in and start charging? We face many similar situations in our daily lives.

Since such scenarios are common, it is clear that we need batteries that store more, last longer, and are safer to use.

Some ultra-fast charging speeds have reached 240W, which is a whole new level of smartphone charging that reduces the full charging time of the phone to just a few minutes.

Chinese company “Oppo” unveiled this year two new versions of its SuperVooC technology for ultra-fast charging, one of them at 240 watts, and the other at 150 watts.

The first technology can charge a 4,500 milliamps battery in just 9 minutes, while the second charges the battery fully in 15 minutes, according to the company’s statement.

Oppo explained that it relies on a technology that supplies the smartphone with 24 watts per 10 amps when it manufactures the wire that conducts the electrical charges, and this is translated into energy of 10 watts per 24 amps when those charges reach the phone, through three charging paths.

In addition, it will use new technologies to ensure the safety of the smartphone battery with the provision of supercharging, and that is represented by 13 temperature sensors inside the phone that support the new super-speed.

This is in addition to a new electronic chip for monitoring the temperature, in order to keep the temperature of the phone and the battery within the safe limits during the charging process.

The company also relies on the Smart Battery Health algorithm and Battery Healing technology to preserve the life of phone batteries with supercharging, in the long term.

This is by developing the electrolytic substitution process inside the battery, thus allowing its positive and negative poles to self-repair during the process of charging and discharging electrical charges, which increases the battery life.

As for the Chinese company Honor, which is independent of its previous parent company, Huawei, it revealed its new family of phones Honor Magic 4, which includes the upcoming Magic 4 Pro version with 100W ultra-fast charging technology.

The company indicated that its new charging technology will allow the user to charge his phone to 100 percent in just 30 minutes via the charging cord.

It also provided the phone’s battery with 100-watt wireless charging capabilities, so that it can wirelessly charge its battery to 50 percent within 15 minutes.

On the other hand, some technicians consider that fast charging techniques are harmful to the battery and smartphones alike, regardless of the charger’s capacity.

Besides, experts point out that what harms most are external factors in addition to the bad habits that we do.

An example of these habits: charging for a long time, using any available charger, and leaving the phone charging all night, although many brands are now adding a feature to stop charging when the battery is full.

In addition, high temperatures are considered the most lethal for phones and batteries, as phones do not withstand high temperatures starting from 32 degrees Celsius, as this affects the electronic circuits in the screen.

The touch screen is also affected by sunlight and heat, which leads to slow movement and difficulty in responding to the commands of the mobile phone user, from opening or closing any of the applications and poor mobile internet connectivity.

In addition, a significant increase or decrease in temperature will permanently damage the battery capacity, which means that the battery will not be able to provide the device with power for a long time over a single charge cycle.

Charging at elevated ambient temperatures can also increase battery damage. Even storing the battery in a hot environment is liable to cause major irreparable damage.

On the other hand, when the device is used in a very cold environment, the battery life may decrease, but this situation is occasional and temporary.

Battery performance will return to normal once the battery temperature returns to its normal operating range.

Therefore, phone companies advise their customers during high temperatures, to:

– Avoid sunlight to reduce the risk of damage, and use the phone in the shade, which reduces heating up

– Lower the screen light to use in the shade

– Removing the phone case or what is known as the “cover”, despite its importance, in the event of high temperatures or exposure to sunlight. It can be dispensed with so as not to help the phone heat up.