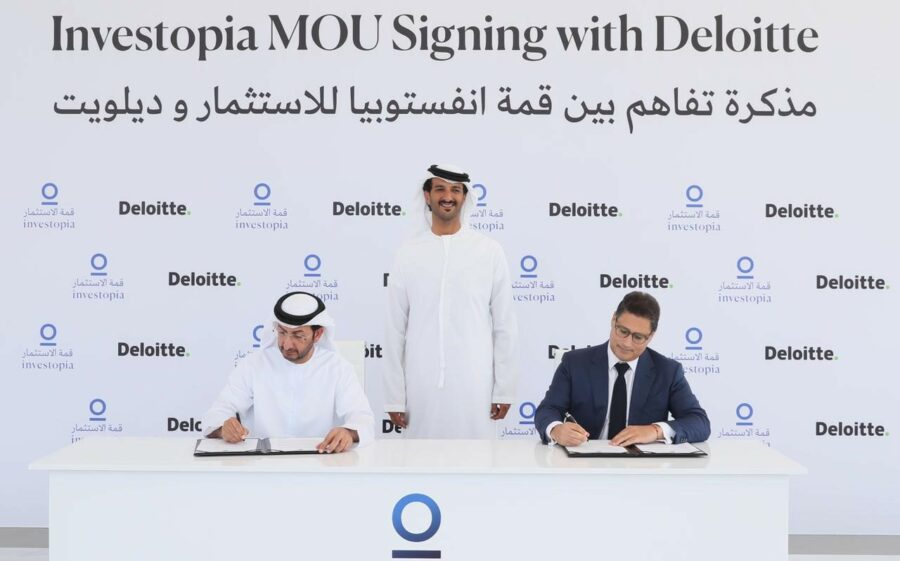 Investopia investment summit announced the signing of a Memorandum of Understanding (MoU) with Deloitte Middle East for collaboration to enrich the Summit’s discussions and workshops.

Under the terms of the agreement, the two parties will jointly study significant economic areas such as investments in Artificial Intelligence, standards of social and environmental sustainability and governance; promoting women’s participation in economic growth; and the role of government policy in driving economic recovery from the pandemic.

The MoU was signed in the presence of HE Abdulla Bin Touq, Minister of Economy, along with senior officials from both sides.

Commenting on the partnership, H.E. Bin Touq said: “We believe in the necessity to develop a global platform to bring together government officials, investors, start-ups/small medium-size enterprises, sector leaders, and social entrepreneurs, and other stakeholders to lay down the foundations of building a responsible and sustainable future economy.”

He added: “Accordingly, we are working to establish qualitative partnerships to promote our efforts in enriching agendas and sessions that best serve the chief purpose of the Investopia Summit.”

H.E. Bin Touq further underlined the significance of public-private sector partnerships in establishing a prosperous competitive sustainable economy that lives up to the expectations of both governmental agendas and investors. He added that the latest partnership with Deloitte is one of the several vital partnerships the Summit will embark on during the upcoming phase.

The UAE will organize and host the first edition of the Investopia summit on 28 March 2022 alongside Expo 2020 Dubai.  It is one of the major strategic initiatives under the ‘Projects of the 50’ that the UAE Government announced last year.

The inaugural edition of the Summit will witness the participation of more than 50 intellectuals and industry experts as well as more than 300 government officials, institutional investors, startup and SME leaders, social entrepreneurs, and other stakeholders to share ideas, create opportunities, and promote future investments all over the world.