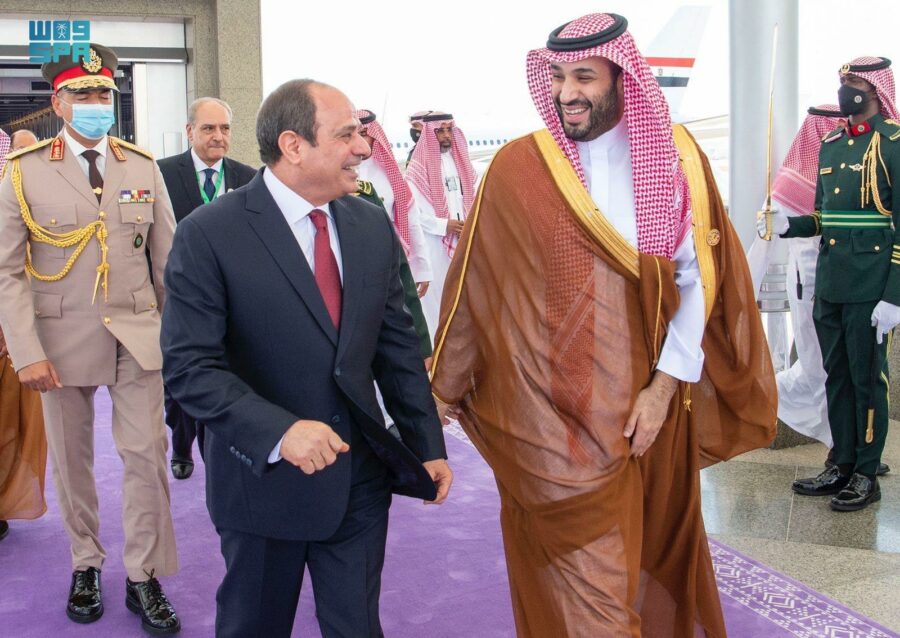 The Jeddah Security and Development Summit, which brings together the leaders of the Gulf Cooperation Council (GCC), in addition to Jordan, Egypt, and Iraq, was launched in the Kingdom of Saudi Arabia today and was attended by US President Joe Biden.

The summit aims to confirm the historical partnerships between the GCC and to deepen joint cooperation in various fields. It stresses the importance of developing ways of cooperation and complementarity among them and building joint projects that contribute to achieving sustainable development in the region.

During the opening of the summit, Saudi Crown Prince Mohammed bin Salman announced there is a need to unite efforts to support the global economy. This is while US President Joe Biden, who is participating in the summit, announced that the US will not abandon the Middle East, saying, “We will work in the Middle East and establish sustainable economic relations.”

The leaders kicked off the summit by taking a commemorative photo of the event. Then the Saudi Crown Prince spoke, noting that the Jeddah summit is being held at a time when the world is witnessing great challenges.

He added, “We hope that the Jeddah summit will face global challenges,” stressing that the global economy is linked to the stability of energy prices, and “we must continue to invest in clean energy.”

He pointed out that the Kingdom had previously announced an increase in its production capacity to 13 million barrels.

“We will not abandon (the Middle East) and we will not leave a vacuum that will be filled by China, Russia, or Iran,” he added.

On the sidelines of the summit, Biden met with UAE President Sheikh Mohammed bin Zayed Al Nahyan and invited him to make an official visit to the US, in a gesture that comes after months of tense relations between Washington and Abu Dhabi over the Ukrainian war and other issues.

For his part, Egyptian President Abdel Fattah El-Sisi said: “It is time for our efforts to combine to put an end to all chronic conflicts and civil wars,” stressing that “it is no longer acceptable to have  sons of our Arab nations become refugees or impacted by the scourge of war.”

He explained that “the Jeddah summit comes at an exceptional moment,” noting that “it bears a clear indication of our renewed determination to develop a partnership between our countries and the United States, whether at the bilateral or regional levels.”

Sisi met Biden on the sidelines of the summit. The Egyptian presidency said he discussed food security and energy supply disruptions with him.

The Jordanian monarch, King Abdullah, said: “We are meeting today, and our region and the world are facing multiple challenges from the economic repercussions of the Corona pandemic, and the repercussions of the Ukrainian crisis on energy and food, in addition to the ongoing conflicts that the region suffers from, therefore, we must consider opportunities for cooperation and work together, by striving for regional integration in the areas of food security, energy, transport, and water.

For his part, the Emir of Qatar, Tamim bin Hamad, said at the beginning of the summit: Today’s meeting is taking place amid challenges for the international community to strengthen cooperation to find solutions to global issues…there is no security, no stability, and no development in light of conflicts.

He added, “Crisis and wars in any region affect the entire world. The war in Ukraine has contributed to exacerbating an economic crisis that may lead to humanitarian disasters.”

He pointed out that “achieving stability in the Gulf region is necessary not only for it but for the entire international community.”

Kuwaiti Crown Prince Sheikh Mishaal Al-Ahmad Al-Jaber Al-Sabah said that the challenges the region is going through “require us more consultation and cooperation to confront them.”

In his speech, Iraqi Prime Minister Mustafa Al-Kazemi said: “We seek to enhance economic cooperation and security coordination between the countries of the region,” stressing that “the challenges in the region call for cooperation between countries.”