Macron inaccurate with Biden about Saudi and UAE production 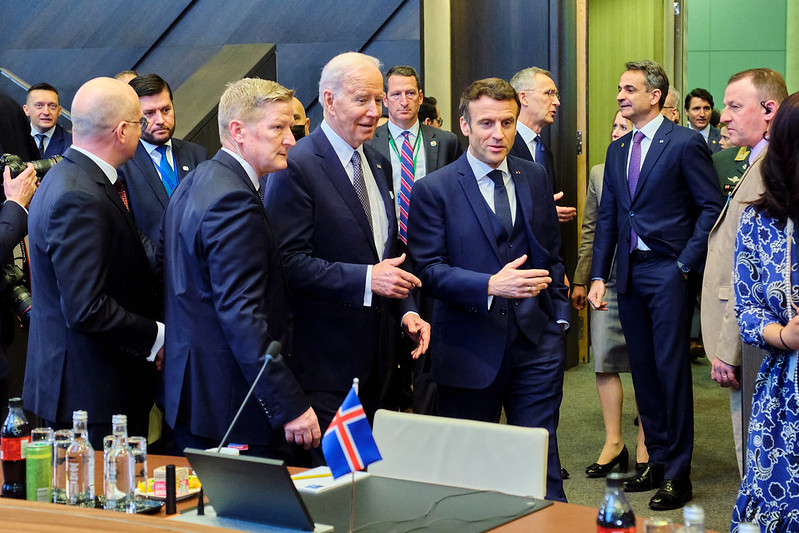 US President Joe Biden and his French couterpart Emmanuel Macron

The video, reported by social media, showing the moment French President Emmanuel Macron interrupting the conversation between US President Joe Biden and his adviser Jake Sullivan, in order to tell him of his call with UAE President Sheikh Mohammed bin Zayed, raised a state of global concern in global oil markets.

This confusion came on the eve of the “OPEC +” meeting, which is awaited by these markets, amid expectations to accelerate the increase in crude production in August, in the hope of relieving the rise in prices and inflation pressures.

And the Organization of Petroleum Exporting Countries (OPEC) had announced that the date of its meeting would be brought forward by one day, to today, Wednesday, according to a statement by the organization, at a time when the ministerial meeting of the “OPEC +” alliance will continue to be held tomorrow as originally scheduled.

What Marcon said to Biden was that Riyadh and Abu Dhabi do not have spare production capacity, which caused oil prices to rise on Tuesday by about 2 percent, bringing Brent crude, the standard for August delivery at 117.35 dollars a barrel.

However, a discussion panel on Twitter hosted experts in the energy sector, and concluded that it seems that the French president did not understand the issue, and that he could not differentiate between the “OPEC production ceiling” and the target ceiling, and production capacity. This was mentioned by Dr. Anas Al-Hajji, an academic specializing in energy field who was chosen as one of the most famous influencers in the oil and gas sector in the world on the Twitter platform.

For her part, the journalist specializing in the oil file, Amna Bakr, said that Macron’s interpretation of Biden is “totally inaccurate”, as the UAE is not producing at its maximum capacity at the present time, and “Macron’s signal that Saudi Arabia may increase by 150 thousand barrels per day” may be linked to the Saudi quota, which is the easing of the overall cuts.”

Macron had told Biden: “The Saudis can increase a little, by up to 150 (thousand barrels of oil per day) or a little more, …they don’t have huge production capacities before 6 months.”

Author Michael Schellenberger wrote on Twitter: “It is very interesting that Macron chose to communicate information in the way he did, which was accessible to journalists.

“It’s as if Macron wanted the international media to report on his information, perhaps as a way to pressure Biden to finally act,” Schellenberger added.

Biden is scheduled to visit the region in July and participate in the summit of the Gulf Cooperation Council.

Macron’s statements prompted the UAE Energy Minister, Suhail Al Mazrouei, to issue a statement to refute the French president’s allegations. In his statement, Al Mazrouei confirmed that the UAE’s current production is close to the country’s reference production ceiling in the “OPEC +” agreement, which is 3.168 million barrels per day. Commenting on what is being circulated about the level of UAE production, he added that his country’s commitment to this ceiling remains until the end of the agreement.