Poll: The Fed will raise interest rates by 50 basis points in September 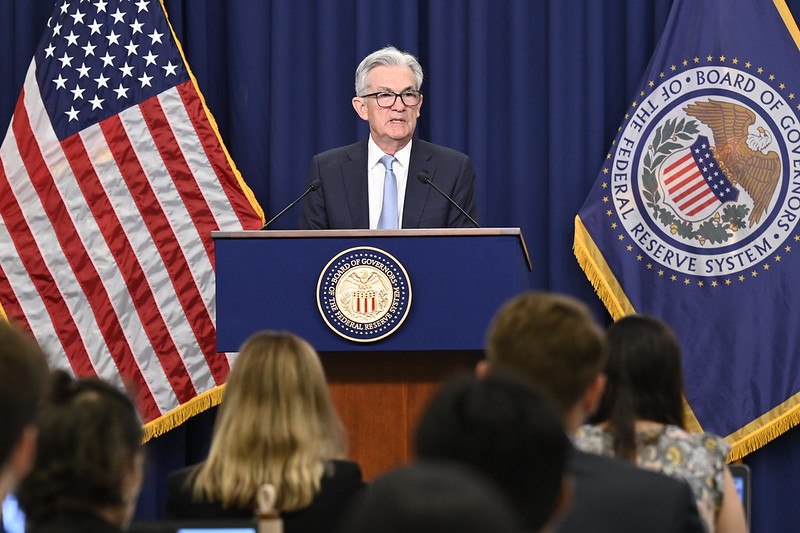 Financial markets, gold contracts, oil, and even currencies are awaiting the keynote speech that Federal Reserve Chairman Jerome Powell will deliver before the annual conference of global central banks in Jackson Hole, Wyoming, next Thursday and Friday.

The speech could indicate how long the US central bank will need to reduce inflation rates while emphasizing the continuation of the theory of maintaining high rates, despite the economic slowdown.

Inflation, stagnation and the ceiling of tightening of monetary policy will be main topics in this symposium, which is held annually at the American city of Jackson Hole.

The city has hosted this annual conference (organized by the Federal Reserve Bank of Texas) since the era of former Federal Reserve Chairman Paul Volcker. It is considered one of the oldest central banking conferences in the world and brings together economists, financial market participants, academics, US government representatives and the media to discuss long-term policy issues of common interest.

In turn, the Governor of the Bank of England, Andrew Bailey, confirmed that he will be in Jackson Hole to monitor the discussions without participating in them.

What will Powell say?

In the previous years since Powell became Fed Chairman, he used the annual Jackson Hole Symposium to make key statements about monetary policy and the economy.

About a year ago, when Powell delivered his address at the annual economic conference in Jackson Hole, the global audience had been watchful of his every word for insights into the outlook for growth, inflation and monetary policy in an extremely volatile environment.

Last year, Powell took to the podium, asserting at the time that higher inflation “is likely to prove temporary,” that the low unemployment rate” reduces the size of slack in the labor market,” and that we “see little evidence of wage increases that might threaten excessive inflation.” But Powell miscalculated, which caused widespread criticism of the FED.

In his speech, Powell will try in a few days to paint a very accurate picture of the economic situation. It is expected to focus on 3 points:

The first is that the US economy is strong, the labor market is very narrow, and the inflation rate is much higher than the target;

Second, that the FED will continue its tight policy in order to curb inflation and relieve pressure on the labor market;

And third, that the FED will not relent until it makes sure that its policy has reached its target of 2 percent inflation.

Powell will be keen to defuse the market’s notion that the FED will soon end its tightening monetary policy.

Many investors appear to have arrived at this conclusion based in part on Powell’s statement in July that future interest rate increases would depend on the data, ignoring his frequent reference to the Federal Open Market Committee’s (FOMC) interest rate expectations pointing to a much higher peak than financial markets had expected.

On the other hand, Powell will not reveal the direction of the Federal Open Market Committee at its next meeting in late September.

The US Federal Reserve has raised interest rates four times since March. It started with a quarter of a percentage point, before accelerating the pace.

Economists polled by Reuters on Monday said the FED will raise interest rates by 50 basis points in September, amid expectations that inflation has peaked and fears of a recession growing.

Most economists in the August 16-19 poll expected a half percentage point increase next month, which would raise the key interest rate to between 2.75 and 3 percent. While 18 out of 94 respondents expected the FED to raise interest rates by 75 basis points.

On the back of renewed fears of the FED’s intention to raise interest rates to curb inflation, most stock markets fell on Monday and the dollar rose. The 10-year Treasury bond yield decline.