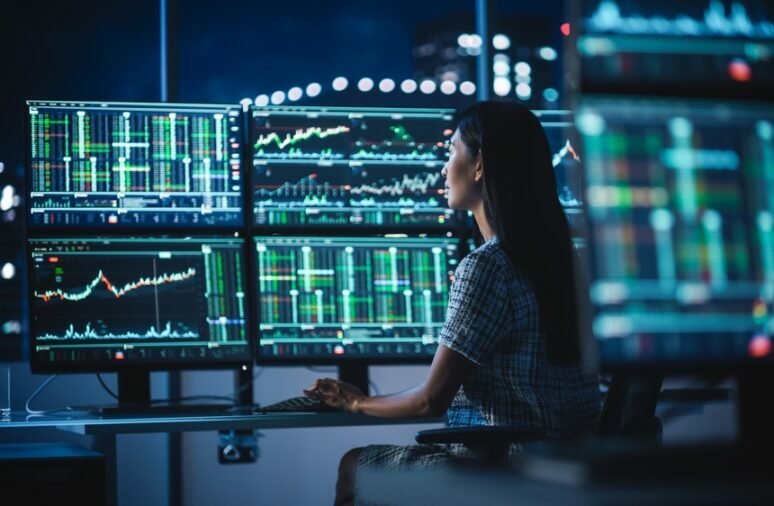 According to the Arab Federation of Capital Markets, over the previous week, global stocks tumbled, government bond prices plunged, the pound dipped against the US dollar, and cryptocurrencies wobbled on Friday as investors, already worried about rising interest rates and stubbornly high inflation, started quaking at the growing likelihood of a recession. In parallel, US natural gas futures fell to a fresh 10-week low on Friday on a drop in crude prices and expectations the weather will remain mild into early October, keeping both heating and cooling demand low and allowing utilities to inject lots of gas into storage over the next few weeks. Within this context, gold price touched a new 2-year low after a series of rate hikes further dampening demand for bullion.
2-year Treasury yield tops a 15-year high on Fed rate hike

US Treasury yields surged on Friday with the yield on the 2-year Treasury yield notching a new 15-year high as markets assessed the Federal Reserve’s latest rate hike. The policy-sensitive 2-year Treasury hit a fresh 15-year record of 4.27%, while the yield on the 10-year hit an 11-year high of 3.69%. It is worth mentioning that 10-year Treasury yields have risen from four-month lows on Aug. 2 on rising expectations that the Fed will continue to tighten monetary policy and hold rates higher for longer even if it risks denting growth. This significant inversion, the most inverted level since at least 2000, with short-term rates higher than long-term rates, points to the risk of a recession. As such, the US dollar surged to a fresh two-decade high on Wednesday, since investors often seek safe haven in US dollar assets during times of economic and geopolitical fears.

In fact, the Fed raised rates by 75 basis points on Wednesday at its September meeting and signaled that it will keep hiking rates until the funds level hits a “terminal rate,” or an end level of 4.6% next year. The central bank plans to stay aggressive against inflation this year, raising rates to 4.4% in 2022. In fact, the bond market anticipates a recession in the first half of 2023 and is already looking forward to the eventual recovery, that’s what happened in 2006 and 2007, following the same pattern. It is worth mentioning that this uptick is the third consecutive 75 basis point move and the fifth increase in the last six months. The series of hikes has brought the federal funds rate to a range of 3% to 3.25%, the highest it’s been since 2008, and up from a rate of near zero to start the year. In parallel, officials see inflation rising to 5.4% overall this year, they expect inflation to drop to 2.8% or 3.1% on a core basis in 2023. Officials projected 2.3% in 2024, followed by 2% in 2025.

The US Dollar index surged to its highest level since early 2002 at 114.5 as investors scrambled for safe havens. In parallel, the Swiss franc hit its strongest against the euro since 2015, as the Swiss National Bank raised interest rates by 75 basis points to 0.5% as planned, bringing the rate into positive territory for the first time since 2015. However, the British pound and the euro fell sharply against the dollar on Friday. In fact, the British pound slumped almost to $1.086, a 37-year low, Sterling’s weakness came after Thursday’s lower-than-anticipated Bank of England hike by 50 bps. In parallel, the euro dropped below $0.98 for the first time ever. On another hand, after the US dollar’s spike to near 143 Japanese yen, Japan intervened in the currency market on Thursday to buy the yen for the first time since 1998.

In parallel, global stock markets tumbled as recession fears returned with world stocks hitting two-year lows on Friday and continuing a bad fall since August, as investors try to cope with the economic headwinds in the United States and around the world that are only likely to worsen. In fact, major stock indexes closed out the week with net losses, topping the fifth decline in the past six weeks. The Dow Jones industrial average dropped by 4.0% on a weekly basis, and fell below the 30,000 mark, to the lowest level since November 2020. The S&P 500 slid by 4.6% while the Nasdaq Composite dropped by 4.6% over the week. In parallel, Asian stocks recorded their fourth straight weekly decline on Friday, as the MSCI’s broadest index of Asia-Pacific shares outside Japan fell by 3.5% to a two-year low.

Oil prices to lowest levels since January on recessionary fears

Oil prices fell to their lowest levels since January 2022, after posting a fourth straight week of declines on fears of lower fuel demand from an expected global recession generated by rising worldwide interest rates and as a rising US dollar limits the ability of non-dollar consumers to purchase crude. Brent crude futures slipped by 6.6% to $85.5 a barrel, while the US West Texas Intermediate (WTI) crude futures dropped to $78.3 a barrel. Both contracts slumped around 5% on Friday to their lowest since January. In fact, oil prices have been on a steady slide all summer long, but that could change in the last stretch of the year, with Brent crude to head back toward $100 a barrel as supply tightens, according to JPMorgan. In a note published on Wednesday, analysts backed their forecast for the international oil benchmark to hit $100 a barrel in the fourth quarter and $98 a barrel in 2023.

Natural gas futures fell for the third time this week after the US Energy Information Administration (EIA) storage report showed the biggest boost to underground storage this year, reflecting weakening demand and robust production, while supply and demand are beginning to align after a boiling summer that had created doubts about the adequacy of domestic supplies. EIA reported an injection of 103 Bcf into natural gas storage for the week ended Sept. 16. The result exceeded analysts’ expectations and appeased market concerns about supplies for the coming winter. In addition, shoulder season pricing has finally arrived for US spot natural gas hubs, with mild temperature forecasts sending cash prices across the United States plummeting in Sept. 23 trading. As such, the NYMEX Henry Hub October contract fell 12.1% over the week to $6.8/MMBtu, continuing a two-day slide that pushed the prompt-month below $7/MMBtu for the first time since mid-July.

Gold prices continued the drop to set a new two-year low after a number of central banks followed the US Federal Reserve in raising interest rates to cool inflation. Spot gold fell by 1.7% on a weekly basis to $1,656 per ounce, on its way to a second consecutive weekly loss. Gold prices decline comes on the back of a rallying US dollar, which touched a 20-year high, curbing demand for the greenback-priced metal while 10-year yields also jumped to their highest since April 2010, further dampening demand for bullion. Within this context, analysts may see the precious metal slipping further towards the $1,620 to $1,580 per ounce zone in the international markets in the coming days, as the rates hike to combat inflation, the renewed geo-political risks surrounding the Russia-Ukraine war, the risk-averse sentiments, and slowdown fears globally shall still reinforce gold prices at lower levels.

Cryptocurrency prices came under pressure after the US Federal Reserve delivered another interest-rate hike and warned of economic pain from the aggressive policy tightening still to come. Bitcoin was trading at $18,627 and came close to dropping below the $18,000 level, before pushing up back to near $20,000. The global crypto market cap remained below the $1 trillion mark. The second largest crypto, Ethereum was seen trading near the $1,200 level. The price of ETH has been dipping since the Merge took place as miners continued to dump their ETH in the market coupled with macroeconomic factors. However, if the selling pressure from miners increases, ETH is likely to fall below the $1,000 level, as per forecasts.