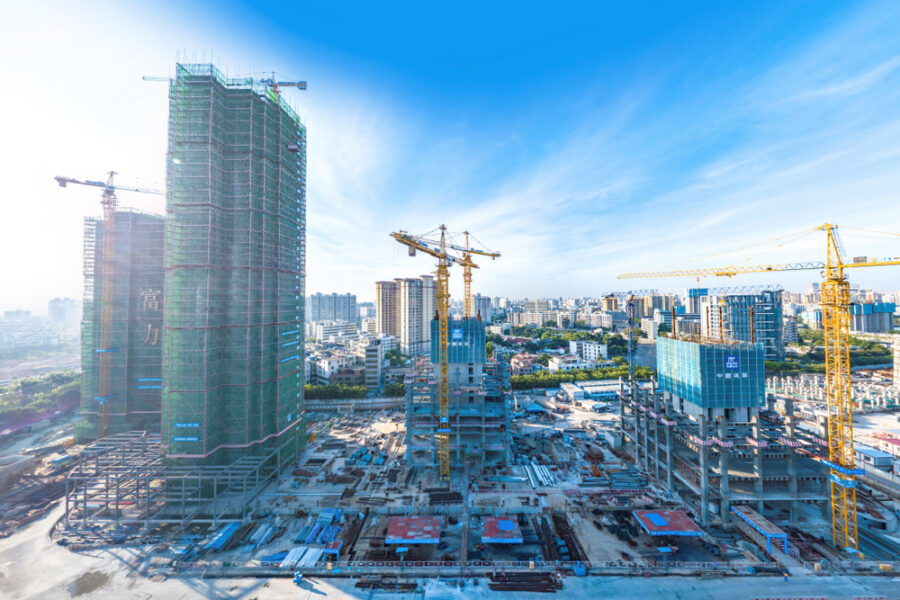 The real estate sector in China is facing a serious debt problem. Major developers have accumulated huge amounts of debt, which has led to construction halting and many homebuyers not paying their debts.

This crisis may not remain within China’s borders but rather threatens the global economy. The size of the Chinese economy, the second in the world, means that turmoil in an important market such as real estate can affect the global financial system.

Real estate accounts for about 70 percent of personal wealth in China.

Homebuyers often pay upfront for unfinished projects, with “pre-sales” accounting for 70 to 80 percent of new home sales. It is money that developers need to use to finance several projects at once.

According to ANZ Banking Group, more than $220 billion in loans could be linked to unfinished projects. In addition, credit has dried up, a major source of cash in the boom years.

In 2020, the Chinese government introduced “red lines”. They are accounting measures to limit the amount developers can borrow. This led to funding cuts, and subsequent mistrust in the market, which also affected banks’ willingness to lend to real estate companies.

In 2021, Evergreen defaulted on its $300 billion debt, and about 30 real estate companies failed to make their foreign debt payments. Since then, investors have begun to worry that the developers’ financial problems will spill over to the rest of the economy.

The boycott of tens of thousands of homebuyers in the past two months to pay for mortgage payments on their unfinished homes for fear of having their money stolen has put developers’ problems back on the fore, while China’s economic growth continues to slow (in the last quarter it grew just 0.4 percent compared to the previous year).

The mortgage strike appears to be growing and spreading among Chinese cities, where nine out of 10 new properties were being sold before they were built or finished.

The boycott to repay loans threatens to deepen the real estate recession in China. Down payment is the lifeblood of both developers and banks in China.

According to estimates by Standard & Poor’s, banks face the danger of incurring losses of more than 350 billion dollars due to mortgage risks. Standard said that 2.4 trillion yuan ($356 billion), or 6.4 percent of mortgages, are at risk. While Deutsche Bank warned that at least 7 percent of home-buying loans are at risk.

It is clear that Chinese banks that are heavily exposed to the real estate sector are “stuck” in the middle. According to the statement issued by the People’s Bank of China, there were 39 trillion yuan of outstanding mortgages and another 13 trillion yuan of loans to real estate developers at the end of last March.

This leaves banks with no options but to help developers overcome the crisis and complete their projects, otherwise they will incur greater losses. They are already facing protests from depositors, who are demanding that banks return their monies, fearing that their deposits will evaporate.

“China’s real estate problems could spill over into other major sectors if problems persist – and three particular companies are most at risk, according to credit rating agency Fitch.

“If effective political intervention is not achieved in time, the distress in the real estate market will extend and have implications on various sectors in China outside the real estate sector’s direct value chain,” Vicho analysts warn in a report.

Fitch analyzed the impact of the crisis over the next 12 to 24 months on more than 30 types of companies and government agencies, It found three companies most vulnerable to the real estate problem:

Asset management companies: These are companies that own, according to the report, a large number of assets backed by collateral related to real estate, which makes them highly vulnerable to the distress of the real estate market for long periods.

– Engineering and construction companies (non-state-owned): This sector has faced difficulties since 2021, and does not enjoy competitive advantages with exposure to infrastructure projects or access to financing compared to other government-linked companies.

-Small steel producers: Many of these have been operating at a loss for a few months and may face liquidity problems if the Chinese economy remains weak, “particularly given the significant influence in this sector,” according to Fitch.

The slowdown in the real estate sector has already lowered broader economic indicators such as investment in fixed assets and the furniture sales component of retail sales.

And “Fitch” indicated that official data showed a 32 percent drop in home sales in the first half of this year compared to last year. Its report was based on industry research that indicated that the top 100 developers were likely to perform worse – with sales down 50 percent.

Impact on other sectors

Analysts warned that “a deterioration in homebuyer confidence may halt the momentum of the rebound in sales seen in May and June”.

“Fitch believes that the recent rise in homebuyers placing mortgage payments on stalled projects underscores the potential for a worsening real estate crisis in China, as waning confidence could stall the sector’s recovery, which will eventually spread through the local economy,” the report said.

Chinese property developers came under increasing pressure about two years ago, when Beijing began cracking down on companies’ heavy reliance on debt for growth.

According to CNBC, figures on vacancy rates paint a picture of the scale of the real estate problems. China’s residential property vacancy rate has averaged 12 percent in 28 major cities, according to a report released last week by the Beike Research Institute, a subsidiary of Chinese real estate sales and rental giant Ke Holdings.

This is second globally after Japan, and higher than the vacancy rate in the United States of 11.1 percent, the report said.

The report explained that if there are strong expectations of lower house prices, these empty apartments may exacerbate the oversupply in the market – and the risk of lowering prices further.

The Financial Times recently reported that China has issued $148 billion in loans to help property developers.

But in a recent note, Oxford Economics said any government intervention in real estate and infrastructure may provide a short-term boost but it “is not ideal for China’s long-term growth as the government and financial sector are forced to help sustain an unproductive (and failing) real estate industry”.

“This is not just a financial crisis,” said Ding Shuang, head of Greater China economic research at Standard Chartered. “The boycott of mortgages risks becoming a serious social issue.”

That could become a problem for President Xi Jinping ahead of an important party conference later this year when he is expected to seek a historic third term.