China’s Silk Road initiative pushing its way through the Gulf

How is the region preparing for this? 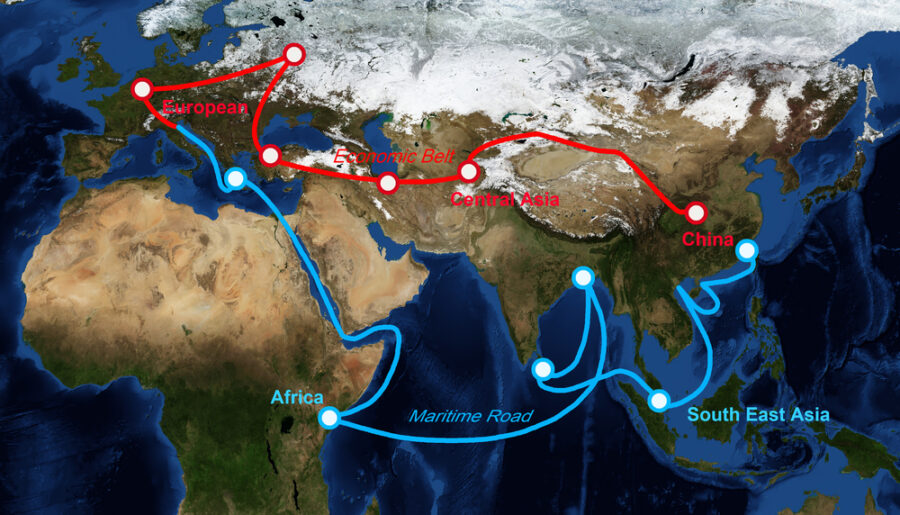 “Beijing is ready to move quickly towards the region,” said the Director of the China Program and Co-Director of the East Asia Program at the Stimson Center in Washington DC, and this is evidence that the Chinese dragon places a priority on consolidating its cooperation with the countries of the Middle East, the GCC, and Africa and have already begun with its plans.

The initiative to revive the Silk Road constitutes a strategic crossing point for the Chinese giant, in order to restore its historical influence and strong presence. It has become a key source of foreign investment in the Middle East, in addition to being a major economic partner for many Gulf countries, led by Saudi and the UAE.

Is this an indication of an era that establishes a new global trade and economic order?

The economic interest and the strengthening of relations are not just born from China, but as well from the GCC, who are seeking closer relations with China, mainly to diversify their oil economies by encouraging Chinese investments.

A prime example of this is efforts to pave the way for a Free Trade Agreement (FTA) between China and the GCC.

However, the free trade agreement is not an orphan. It is part of large investments, treaties, and huge initiatives that were held between the GCC and China, in addition to the countries of the Middle East and Africa, within the framework of the “Belt and Road” initiative.

What is this initiative?

The initiative is based on reviving the ancient Silk Road that connected China with the world in the nineteenth century, which had a major role in the prosperity of many ancient civilizations.

But China did not put forward the “Silk Road” initiative or what is known as the “Belt and Road” until after it activated all its diplomatic tools globally and regionally to provide the reasons for the success of this project, and for this, it took several measures, especially towards Arab countries, such as agreements and exceptional diplomatic and cultural activity that the region had not previously experienced.

After preparing the groundwork, China encouraged 21 Arab countries in the trillion-dollar “Belt and Road” project to revive the legendary Silk Road in order for China to transport and sell its goods to the markets of Europe and Africa. Two-thirds of its exports to these continents now pass through the infrastructure built by the Gulf states.

Beijing invested $10.5 billion in 2021 in energy projects linked to this initiative in Iraq, China’s third-largest oil supplier after Saudi Arabia and Russia.

As for Egypt, which is an important station for the initiative, the two countries signed in 2018 several contracts worth $18 billion. Beijing is also involved in many infrastructure projects there.

Among them is the administrative capital of New Cairo and the economic and technological development zone in the economic zone of the Suez Canal in Egypt at Ain Sukhna.

Morocco has also concluded agreements with China in the context of the initiative to enhance cooperation between the two countries.

Saudi is considered the gateway to the Arab world in the “Belt and Road” initiative (BRI) and is China’s first partner in the region, with a trade exchange volume of $70 billion, a sum expected to reach $100 billion.

The UAE attaches special importance to the initiative, especially its marine activities, and considers it a favorable opportunity for its regional and international development and investment aspirations. The UAE has pumped $10 billion into a joint Chinese-Emirati investment fund to support the initiative’s projects in East Africa, and signed more than 13 memoranda of understanding with China to invest in various fields within the UAE.

The Sino-Kuwaiti relations have also risen to the level of “strategic partnership”, which has resulted in the expansion of cooperation in the fields of energy, infrastructure, security and combating terrorism.

Manama is counting on the “Belt and Road” initiative to achieve Bahrain’s Economic Vision 2030.

Qatar is also an important partner in the initiative, consistent with the Qatar National Vision 2030. The initiative has also expanded the scope of Chinese investments in the Qatari gas field, as well as Qatari investments in China in various fields.

The initiative is in line with the economic restructuring that the Sultanate of Oman has undertaken since 2011 to diversify its economy away from dependence on oil.

During the first half of 2021, the volume of trade exchange between the Arab Gulf states and China amounted to $103.8 billion, an increase of 35.6 percent over the previous H1.