The Federal Reserve's future policy has weighed heavily on the markets 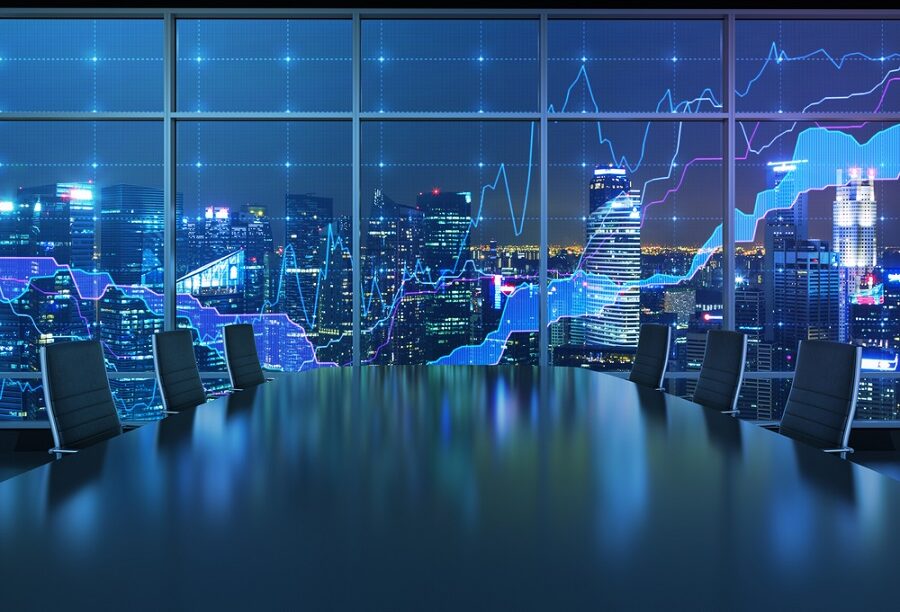 According to the Arab Federation of Capital Markets, over the previous week, US stocks rose but offered widely divergent returns for the week, as investors reacted to a busy calendar of third-quarter earnings reports, while hopes that the Federal Reserve might slow its pace of rate increases seemed to be a driver of positive sentiment during the week, as the US economy expanded over the third quarter of the year, for the first time in 2022, pushing US Treasury yields back below 4.00% before rising a bit on Friday. In parallel, oil prices witnessed some weekly volatility on supply concerns on one hand, and on widening COVID-19 restrictions in China, the top crude importer, on another hand. Gold prices remained under pressure, near one-month lows as US Fed is still embarking on a rate hike mode to tame inflation.

On Tuesday, the yield on the 10-year US Treasury note was down by around 17 basis points to 4.067% as the uncertainty over future Federal Reserve policy weighed on markets, raising questions about how long the Fed will continue hiking interest rates and by how much they will be increased. Furthermore, US Treasury yields continued to slide on Thursday after the latest US GDP report showed some signs that inflationary pressures could be easing. As such, the yield on the 10-year Treasury dipped by 11 basis points to 3.902%, while the policy-sensitive 2-year Treasury yield was down by 12 basis points at 4.289%. However, Treasury yields climbed again on Friday as both the Federal Reserve’s favorite gauge of inflation and an employment cost index for September matched forecasts, signaling nothing to disrupt the central bank from imposing another three-quarters percentage point rate hike next week.

In details, the US economy posted on Thursday its first period of positive growth for 2022 in the third quarter, temporarily easing recessionary fears, as per the Bureau of Economic Analysis, when the GDP increased by an annualized 2.6% annualized for the period, against the Dow Jones forecast for 2.3%, while consumer spending decelerated, increasing at 1.4% in the quarter, down from 2.0% in the second quarter. In parallel, Fed policymakers’ favored inflation measure is the personal consumption expenditures price index, and that showed inflation stayed strong in September but mostly within expectations. In fact, the core rate, excluding food and energy, expanded by 0.5% from August, and by 5.1% over the past 12 months. The monthly gain was in line with Dow Jones estimates, while the annual increase was slightly below the 5.2% forecast.

The USD index, which tracks the greenback against a bundle of its main rivals, accelerates its decline to below 110 between Tuesday and Thursday, to a 3-week low, when the US dollar comes under heavy selling pressure on the back of the strong improvement in the sentiment surrounding the risk-associated universe. However, the dollar reclaimed part of the ground lost and approached the key 111 barrier again on Friday, mainly after US data showed that the world’s biggest economy rebounded more than expected in the third quarter, and on the back of the inability of the ECB to surprise markets on the bullish side, which dented the recent steep rebound in the European currency. In fact, the ECB raised its deposit rate by 75 basis points to 1.5%, the highest since 2009, pushing the euro down by more than 1% on Thursday, to falling back below parity with the dollar. On another hand, the British pound was up by 2.7% against the greenback to $1.16 following on the back of Rishi Sunak’s appointment as the United Kingdom’s prime minister.

In parallel, US stocks closed sharply higher Friday, with the Dow Jones Industrial Average surging more than 800 points to book its longest weekly win streak since November 2021. All three major benchmarks scored another weekly advance. In fact, the S&P 500 and Nasdaq each booked a second straight weekly gain, while the Dow rose for a fourth straight week. The Dow jumped 5.7% this week, the S&P 500 gained about 4.0% and the Nasdaq rose 2.2%. It is worth mentioning that equities jumped as investor expectations for the Federal Reserve to shift toward smaller interest-rate hikes after its November meeting offset weak earnings reports from some megacap technology companies. However, one notable exception to the downbeat earnings news over the week was Apple, after the iPhone maker’s revenue and earnings topped forecasts, helped by record back-to-school sales of Macs. Apple shares jumped Friday, closing 7.6% higher.

Oil prices rose slightly during the week on weaker US dollar and on concerns about supply tightening with Europe’s pending cut-off of imports from Russia, as highlighted by Saudi Arabia’s Energy Minister Prince Abdulaziz bin Salman who held discussions on supporting and increasing the stability of the international oil market with European ministers. In fact, top oil exporter Saudi Arabia may cut the prices of crude to Asia in December as weaker-than-expected fuel consumption in China amid its strict COVID-19 rules put a cap on regional demand. It is worth mentioning that government data showed China’s crude oil imports in September were 2% lower than a year earlier, while business activity contracted in the eurozone, Britain, and the United States in October. As such, Brent crude futures increased by 0.3% on weekly basis, to $93.8 per barrel, after rising from $90 to $95 per barrel between Tuesday and Friday, while US West Texas Intermediate (WTI) crude futures were up by 3.4%, at $ 87.9 a barrel.

After falling over the last weeks, the Nymex contract settled at $5.95/MMBtu, up by 20.0% from Friday’s close. In fact, technical indicators pointed to a market that was oversold and after plunging about $1.50 over the past week, futures were due for a correction. In addition, the US Energy Information Administration on Oct. 27 reported a surprisingly bullish 52 Bcf injection to natural gas inventories during the prior week as colder temperatures across the Central and Eastern US fueled a sharp rise in heating demand, tightening the domestic supply-demand balance. However, one of the big question marks is what will happen to LNG demand when China fully reopens its economy, since Beijing has been the biggest buyer of LNG in the world, but its zero-Covid policy has prevented its economy from operating at full capacity. On another hand, European gas prices may have dropped to levels not seen in more than four months, but this is far from being the end of the energy crisis, despite that the EU’s overall storage levels are at an average of nearly 94% full, comfortably above the 80% target the bloc had set for countries to reach by the start of November.

Gold prices were somehow flat during the week with a slight weekly drop, as some weak US economic data blew expectations that the Federal Reserve might ease the aggressive pace of raising interest rates beginning in December. In fact, spot gold prices dropped by 0.7% to $1,645 per ounce. It is worth mentioning that markets expect the US central bank to raise its benchmark overnight interest rate by another 75 basis points at its Nov. 1-2 policy meeting, with a potential for a smaller increase in December. US rate hikes increase the opportunity cost of holding zero-yielding bullion. On another hand, spot silver prices declined by 1.3% to $19.1 per ounce, platinum rose by 1.6% to $949.5 per ounce, while palladium dropped by 5.7% to $ 1,901. On another note, the World Bank said in its latest commodity price forecast that the price environment for gold will be challenging next year as the Federal Reserve is expected to continue to raise interest rates well into 2023, adding that it looks for gold prices to fall another 4% next year.

In cryptocurrencies, Bitcoin rose by 7.6% last week, breaking on Tuesday $20,000 level for the first time in more than two weeks, ending its longest run below that price level since the token first breached the threshold in late 2020. In parallel, Ether, the second largest cryptocurrency, also surged by more than 19.7% to $1,620 on Saturday, while Dogecoin surged by more than 100% over the week, after Elon Musk sealed a $44-billion deal to take over Twitter last week. In parallel, Britain would have the power to regulate all crypto assets under a proposal the UK financial services minister has added to a draft law before parliament that will almost certainly pass. It would put Britain more on par with the European Union’s markets in crypto assets law which is now being finalized, seen as the world’s first comprehensive set of rules to regulate the emerging crypto sector.