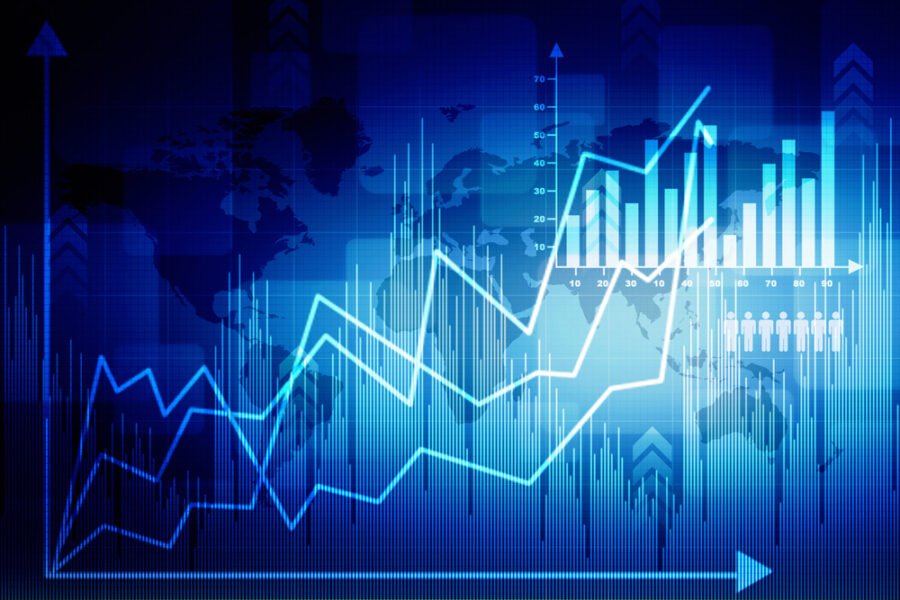 The Arab Federation of Capital Markets that over the previous week, the Fed lifted interest rates by 0.75 basis point, the third hike this year and the largest since 1994. The move is aimed at countering the fastest pace of inflation in over 40 years. Wall Street had been expecting a half-point increase, but the latest consumer prices report released on June 10 prompted the Fed to take a more drastic measure. World stocks on Friday closed out their steepest weekly slide since the pandemic meltdown of March 2020, as investors worried that tighter monetary policy by inflation-fighting central banks could damage economic growth. Oil prices have tumbled to a three-week low, led by a slump in US gasoline futures, as investors worried interest rate hikes from major central banks could slow the global economy and cut demand for energy.

In more detail, the Federal Reserve increased on Wednesday its benchmark funds rate by 75 basis points, the largest hike since 1994, with annual U.S. inflation running at a 40-year high of 8.6% in May. Members of the Federal Open Market Committee reiterated the Fed’s commitment to stabilizing inflation and indicated that a stronger path of rate increases lies ahead. Officials also cut their 2022 economic growth outlook to just 1.7% from 2.8%. In parallel, Fed Chairman Jerome Powell said either a 50 or 75 basis-point rate increase at its next policy meeting in July seemed most likely, and that the economy is strong enough to handle tighter policy.

The US dollar index, which measures the currency against six peers, rose on Friday by 0.16% to 104.1, slipping to the lowest since June 10 at 103.4 overnight. It was at a two-decade high of 105.8 prior to the Fed decision. The greenback jumped to 133.2 yen after dipping overnight to 131.5 for the first time since June 6. The yen retreated sharply from its highest point in nearly two weeks on Friday, with the Bank of Japan likely to keep its ultra-easy policy, defying pressure from aggressive tightening at peers including the Federal Reserve and Swiss National Bank. The euro slipped to US$ 1.054, coming off a one-week high, as it gathered support from the European Central Bank’s decision mid-week on fresh support to contain borrowing costs.

World stocks on Friday headed for their worst week since markets’ pandemic collapse in March 2020, as investors feared sharp rate hikes tipping economies into recession, while growth fears and a soaring Swiss franc whacked the U.S. dollar. MSCI’s broadest index of Asia-Pacific shares outside Japan fell to a five-week low, dragged by selling in Australia where the ASX 200 dropped 2% and was on course for a 7% weekly fall. Japan’s Nikkei fell 6.7% over the week, while shares in China were outliers with modest gains. Overnight the Nasdaq tanked, dropping by 4.8%, the S&P 500 fell by 5.8%, and Dow Jones by 4.8% on a weekly basis. World stocks were down 5.7% for the week so far, on course for the steepest weekly percentage drop in more than 2 years.

Oil prices tumbled about 6% to a four-week low on Friday on worries that interest rate hikes by major central banks could slow the global economy and cut demand for energy, although new sanctions on Iran capped the downside. Also pressuring prices, the US dollar this week rose to its highest level since December 2002 against a basket of currencies, making oil more expensive for buyers using other currencies. Brent futures fell on Friday to settle at $113.1 a barrel, the lowest since May 20, while U.S. West Texas Intermediate (WTI) crude fell to settle at $109.6, the lowest since May 12.

On another note, Russian gas flows to Europe fell short of demand on Friday as an early heat wave in the south boosted demand for air conditioning. Within this context, an oil tanker chartered by Italy’s Eni SpA will soon depart Venezuela with its first cargo in two years to Europe. In parallel, the average nationwide price of a gallon of gas surpassed an all-time high of $5 last week. In California, the state with the highest average gas price, drivers are paying an eye-popping $6.43 per gallon. As such, the U.S. Department of Energy on Tuesday said it was selling up to 45 million barrels of oil from the Strategic Petroleum Reserve as part of the Biden administration’s previously announced, largest-ever release from the stockpile.

Gold prices falling as the dollar and treasury yields gain

Gold prices fell on Friday, as the dollar and U.S. Treasury yields recovered after declining in the previous session and put bullion on track for its biggest weekly drop in a month. In fact, spot gold was down at $1,845.8 per ounce, dented by a stronger dollar and hawkish policy signals from major central banks even as recessionary fears loom. Spot silver fell to $21.6 per ounce and is down about 1.3% over the week. Platinum dipped to $929.2 and has dropped about 4.4% for the week while Palladium went down by 6.5% on a weekly basis to $1,795.5.

On another note, cryptocurrency has had a rough year. Bitcoin has fallen by more than 50 percent since the start of the year, from nearly $48,000 in January to just below $20,000, for the first time since late 2020, and is trading far below its record high of $69,000 it had hit in November last year. Ether, the coin linked to the Ethereum blockchain and the second-largest cryptocurrency, declined to below $1,000, for the first time since January 2021. As such, the global cryptocurrency market capitalization tanked back below $1 trillion to $937 billion, wiping off more than $2 trillion of the value of cryptocurrencies since the peak in November 2021.