Fears that the global economic slowdown will curb energy demand 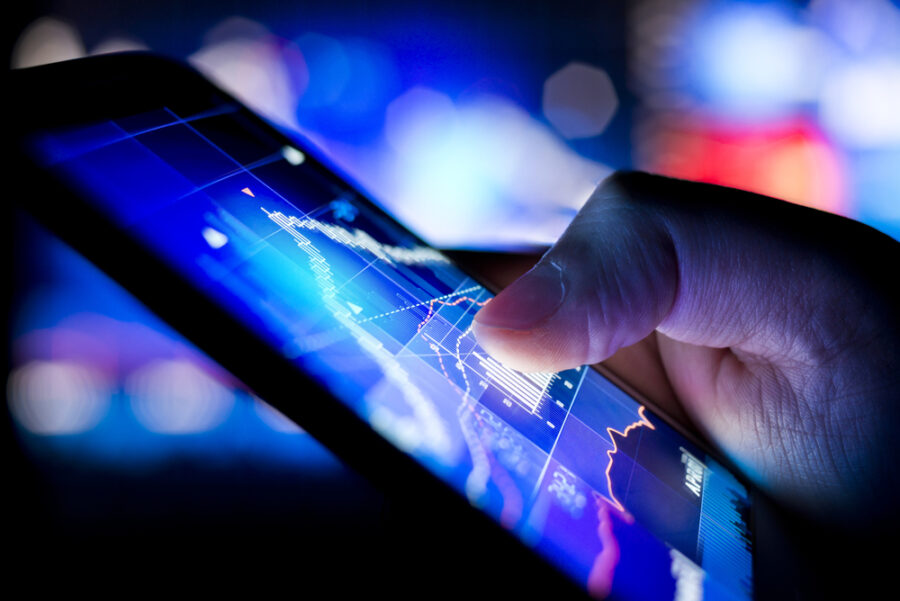 In its weekly review and analysis, the Arab Federation of Capital Markets said that over the previous week, the US CPI data released on Wednesday raised hopes that the pace of price rises in the world’s largest economy has peaked and has started to decelerate, which will be of comfort to the Federal Reserve. As such, US stocks closed higher on Friday and the US dollar grinds higher for risk safety amid economic fears surrounding mainly China, as well as geopolitical woes surrounding Russia and the Middle East. In parallel, oil prices, after rebounding to near $100 per barrel in mid-week, fell again by Friday amid the jump in the US dollar and renewed fears that a slowing global economy would hurt energy demand. In parallel, the price of Bitcoin surged to a high of $25,000 while Ethereum and other top altcoins also spiked sharply higher.

10-year Treasury yields to near 2.9% after easing inflation data

The 10-year US Treasury yield rose by 11 basis points on Thursday to 2.891%, while the 30-year Treasury yield was up by more than 13 basis points to 3.175%, as investors absorbed signs of a relative slowdown in US inflation and hopes the Federal Reserve could slow interest rate hikes. In fact, Thursday’s data showed US producer prices (PPI) unexpectedly fell in July, the first month-over-month decrease since April 2020, amid a drop in the cost of energy products. This followed Wednesday’s surprise news that the annual inflation rate in the US slowed more than expected to 8.5% in July of 2022, from an over 40-year high of 9.1% hit in June, and below market forecasts of 8.7%, while the report was good news for workers with a 0.5% monthly increase in real wages. In fact, the two consecutive days of slower inflation data gave investors some hope that climbing prices were somehow peaking and heading in the right direction.

The US dollar index, which fell 1% on Wednesday on the prospect of a more dovish Fed, trimmed losses on Thursday after gaining some support from the Fed officials’ commentary when San Francisco Fed President Mary Daly said that it was far too early for the central bank to declare victory in its fight against inflation and that a half-percentage point rate rise in September was her baseline. Daly’s comments followed similar cautions from Minneapolis Federal Reserve Bank President Neel Kashkari and Chicago Fed President Charles Evans on Wednesday. The euro was up by 0.8% to $1.026. The Japanese yen weakened by 1.1% at 133.5 per dollar, while the Sterling was last trading at $1.213, up by 0.5% on a weekly basis.

It is worth mentioning that the US Dollar index moved higher this Monday on global recession fears, as China’s economic data were disappointing. In fact, industrial Production increased by 3.8% year-over-year in July, compared to analysts’ consensus of 4.6%, while retail Sales increased by 2.7% year-over-year, compared to analysts’ consensus of 5%. As such, China’s central bank cut key lending rates on Monday in a move to revive demand as data showed the economy unexpectedly slowing in July and the nation’s surveyed jobless rate for people between 16 to 24 hit a record-high 19.9%, and with the other data, signaled worsening confidence and outlook among Chinese investors.

In parallel, Wall Street closed higher on Friday as signs of relative cooling inflation increased investor confidence that a bull market could be underway and stimulated the S&P 500 and the Nasdaq to post their fourth straight week of gains. The Dow Jones Industrial Average rose by 2.9%, to 33,761, while the S&P 500 gained 3.3%, to 4,280 and the Nasdaq Composite added 2.7%, to 13,566. It is worth mentioning that the S&P 500 crossed a technical level of 4,231 points, indicating the benchmark index has recouped half its losses since tumbling from the all-time peak in January.

Oil prices rebounded on Wednesday and Thursday, mainly on the back of encouraging figures on US gasoline demand and as lower-than-expected US inflation data drove investors into riskier assets, before dropping again on Friday amid uncertainty on the demand based on opposing views from OPEC and the International Energy Agency (IEA). In fact, the International Energy Agency raised its oil demand growth forecast for this year, by 380,000 barrels per day, as soaring gas prices drive some consumers to switch to oil, while the Organization of the Petroleum Exporting Countries (OPEC) cut its forecast for growth in world oil demand in 2022 by 260,000 barrels per day. As such, Brent crude futures headed for weekly gains of 3.5% to trade at $98 a barrel, while U.S. West Texas Intermediate crude futures advanced to $94.9 per barrel. However, oil prices settled lower again this Monday after disappointing Chinese economic data renewed concerns of a global recession that would be expected to reduce fuel demand.

Natural gas prices in Europe soared over the previous week as a boiling summer dries up rivers in the region, boosting energy demand in a market that is already suffering from a supply crisis. Consequently, benchmark continuous contract settled higher to near $9 at the highest level since June. In addition, the energy crisis is being exacerbated by very low water levels at key waypoints on Europe’s rivers that are making it difficult for diesel, coal and other commodities to be transported through the continent, as such, utilities could end up using more gas as an alternative. In fact, the water level at Kaub on the Rhine River dropped to the critically low level of 30 centimeters (11.8 inches) on Monday and is forecast to fluctuate just above that level as the week progresses, the latest German government data show. The Rhine is western Europe’s most important river for the transport of fuel and other industrial goods.

Gold prices were somehow flat over the week, hovering between $1,800 and $1,820 per ounce, weighed down by an uptick in the Treasury yields and prospects of US interest rate hikes, although broader volatility in the US dollar kept bullion on track for a shy fourth weekly gain. In detail, gold, which yields no interest, got a slight boost on Wednesday, exceeding $1,820 per ounce, as relatively cooler July US CPI numbers toned down bets for aggressive rate hikes from the Federal Reserve, but some of that optimism faded after Fed policymakers noted that they would continue to tighten monetary policy until price pressures were fully curbed.

In parallel, Bitcoin broke the $25,000 barrier, a level not seen since mid-June, and wiping out some of its recent losses. In fact, market sentiment, a key factor in crypto markets, hasn’t been this optimistic since April, not to mention the strong correlation between crypto prices and global equities, particularly tech stocks, as equities rose last week on cooling inflation had data, while strong jobs data and positive company earnings reports added to investor optimism. In parallel, Ether was up by around 56% in the last month, outpacing the gains made by bitcoin as investors anticipate an Ethereum upgrade. The proposed upgrade has been years in the making is now just a near a month away, with a tentative launch date set for Sept. 19. Optimism over the upgrade has boosted Ethereum to reach near $2,000 for the first time in more than two months.