Learn about the collaboration’s aspects between UK, GCC 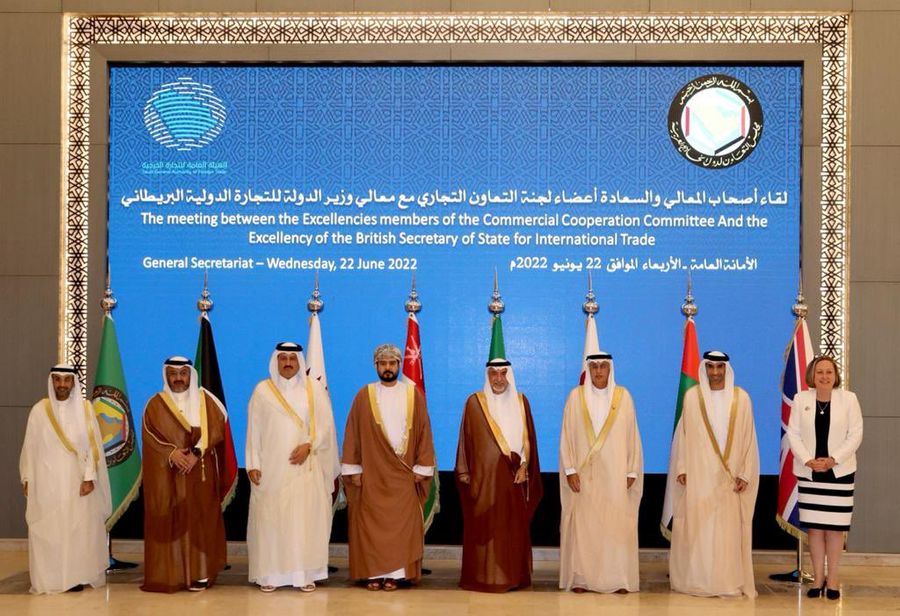 Which industries stand to gain from the UK-GCC Free Trade Agreement?

“Oxford Business Group” responded to this question in a paper that highlighted the negotiations that were officially launched between the two parties in order to reach a free trade agreement. The deal is expected to help attract investment and provide greater opportunities for local companies. It’s worth noting that since leaving the EU, the UK has made every effort to achieve a free trade agreement with the nations of the GCC.

Trevelyan then traveled to Dubai to meet with representatives from the six GCC countries: Bahrain, Kuwait, Qatar, Oman, Saudi Arabia, and the UAE.

The talks, which followed months of exploratory discussions, are focused on securing a free trade agreement that would reduce or remove tariffs on a series of goods and services.

Current annual trade between the GCC and the UK stands at around $40bn.

While there is no official timeline for the completion of the deal, UK and GCC policymakers hope to launch the first round of negotiations in the third quarter of this year, with local and international media reporting that both sides are hopeful of securing a deal before the end of 2023.

One area where the deal is expected to have a significant impact is renewable energy.

While the GCC’s oil and gas reserves are not likely to be included in the deal, any prospective agreement is expected to help Gulf countries diversify their respective energy sectors and reduce their reliance on hydrocarbons.

Talks are set to look at removing tariffs on renewable energy infrastructure such as UK-made wind turbine parts, while GCC countries would also benefit from greater access to UK clean energy technology, such as innovations that improve energy efficiency in homes, buildings, and businesses.

To this end, on Wednesday, July 27 Omani authorities will host a conference in London highlighting the various renewable energy and decarbonization investment opportunities in the country.

Organized by the Ministry of Commerce, Industry and Investment Promotion, in partnership with the Oman Investment Authority and others, the “New Energy in Oman” event will feature a series of speakers from both Oman and the UK and aims to provide a forum for bilateral meetings with UK companies operating in the sector.

Like many Gulf countries, Oman has set ambitious renewable energy targets, with the country aiming to generate 30 percent of electricity from renewable sources by 2030.

The event builds on recent developments between the GCC and the UK in the energy sector. In January Oman and UK energy major BP signed two deals to support the construction of renewable energy and green hydrogen projects in the sultanate.

Figures involved in the discussions have flagged the possibility of the GCC reducing or removing tariffs on food and drinks imports from the UK, which currently range from 5 percent to 25 percent for various products.

In addition to providing a boost to farmers in the UK, such a deal would help shore up food security in the GCC.

Following the disruption of global supply chains associated with the Covid-19 pandemic and, more recently, Russia’s invasion of Ukraine, food security has become a more pertinent issue for governments in the GCC, which has some of the most import-dependent countries in the world when it comes to food.

As OBG has detailed, at the beginning of the pandemic countries in the bloc imported around 85 percent of their food. Almost all rice consumed in the region was imported, as well as some 93 percent of cereals, approximately 62 percent of meat, and 56 percent of vegetables.

While countries in the region have reacted to recent events by increasing investment in agri-tech and improving efforts to bolster agricultural self-sufficiency, any agreement easing the import of food and drink products could further benefit the bloc’s food security.

Aside from individual sectors, the launch of free trade talks is significant for the GCC as it seeks to diversify its trade partners and improve its position in global trade.

On top of existing free trade deals with New Zealand, Singapore, and the European Free Trade Area countries of Iceland, Liechtenstein, Norway, and Switzerland, the GCC is in trade negotiations with the EU, Japan, China, South Korea, Australia, Pakistan, India, Turkey and the Mercosur member countries of South America.

These agreements are expected to play a key role in attracting foreign investment to the region, particularly as GCC countries embark on broad economic transformation strategies to diversify their economies.

For example, as part of its long-term economic plans, Saudi Arabia has launched a series of mega-projects designed to stimulate economic activity in non-oil sectors. They include the $500bn NEOM start city, which operates as a high-tech city for residents and businesses and functions as a tourist destination; the $8bn Qiddiya entertainment city outside Riyadh; and the Red Sea Project, a 34,000-sq-km luxury tourism development.

The launch of trade talks is in many ways the culmination of a recent increase in cooperation between the UK and individual GCC countries.

In January Oman and the UK signed an agreement to strengthen their already close economic ties. UK companies have a long history of investment in Oman, and accounted for around 50 percent of foreign investment in the country in recent years, according to data from Oman’s National Centre for Statistics and Information.

“The UK-GCC free trade agreement will deepen the historic business ties we already enjoy with the UK, unlocking significant opportunities for the sultanate’s ambitious business community. It will help enhance our competitive position in the UK market, as well as boost growth across goods, services, and investment,” Qais Al Yousef, Oman’s minister of commerce, industry, and investment promotion, told OBG.

“It will also present opportunities in renewable energy, manufacturing, logistics, tourism, mining, fisheries, and education – sectors important to the success of Oman Vision 2040 and areas where the UK is a global leader. Indeed, it has the potential to create sustainable, green jobs from Dover to Dhofar. It is an agreement that, when enacted, will be good for Omani workers, businesses, and families. A milestone in bilateral relations.”

Elsewhere, in a sign of a similar strengthening of ties, in March Saudi Arabia and the UK signed a memorandum of understanding to form a strategic partnership council to bolster bilateral investment and cooperation.

With $13.2bn in bilateral trade last year, an increase of 3.9 percent on 2020, Saudi Arabia is the UK’s largest trading partner in the GCC, accounting for one-third of its business with the bloc.

This was followed in late May by the announcement that Qatar would invest $12bn in the UK’s economy over the next five years as part of a new strategic investment partnership.

The deal, which builds on the estimated £40bn ($47.9bn) in existing Qatari investment in the country, will focus on sectors such as financial technology, zero-emissions vehicles, life sciences, and cybersecurity.

The partnership was significantly expanded in September last year, with Mubadala committing to invest an additional £10bn ($12bn) in technology, infrastructure and the energy transition.