Taiwan manufactures about 50 percent of the world's semiconductors 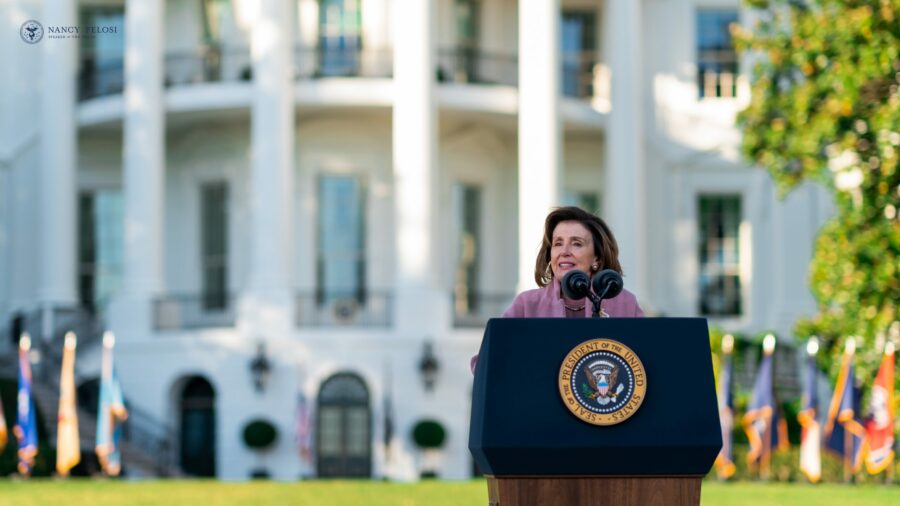 US House Speaker Nancy Pelosi’s visit to Taiwan is raising tension among investors who are already frightened by the threat of a global slowdown amid rising inflation. More importantly, it caused growing fears that any security escalation would be reflected in the semiconductor and electronic chip industry, given that Taiwan manufactures about 50 percent of the world’s semiconductors.

In the face of threats from China, which considers Taiwan part of its territory, Pelosi had arrived in Taiwan late Tuesday, on a defiant visit by the highest US official to go to the island since the visit of her predecessor Newt Gingrich in 1997.

Beijing responded to the visit by announcing the holding of military exercises with live ammunition around the island.

Pelosi’s visit had an impact on global financial markets. It is a factor added to the list of investors’ fears, which range from the repercussions of the Russian-Ukrainian war and the Federal Reserve’s austerity policy to the specter of an economic recession.

Prior to Pelosi’s arrival, the MSCI Asia-Pacific stock index fell the most in three weeks, with the steepest declines in Hong Kong, China and Taiwan. US and European stock futures were also in the red, while Treasuries and the yen rose amid demand for safe havens.

“China’s response to Pelosi’s trip to Taiwan could have an impact on supply and demand chains, which could keep inflationary pressures strong,” Oanda chief market analyst Edward Moya wrote in a note. Cryptocurrencies may also be affected, as “Tensions over House Speaker Pelosi’s visit to Taiwan may affect risk appetite, and this could lead to a drop in cryptocurrencies.”

Shane Oliver, chief economist at AMP Capital Markets, was quoted by Bloomberg as saying that markets are a little nervous and likely to pull back in Asia today. He considers that if there are no more actions than intensive Chinese military exercises and incursions, the short-term effect will be short-lived.

“But if it comes close to actual conflict, there will be a much larger impact in terms of a stock market drop with safe-haven assets (in dollars, bonds and gold) but that seems unlikely. In the long run, this indicates a further escalation in Cold War tensions between the West And China/Russia, which means increased risk premiums.”

Pelosi’s visit to Taiwan would exacerbate the already tense relations between China and the United States, especially in the recent period after the measures taken by the United States against Russia – an ally of China – due to its war on Ukraine.

China had, some time ago, started using its economic weapon against the US. It decided to sell its holdings of US bonds, knowing that it is the second largest holder of US debt in the world after Japan.

According to the US Treasury website, China reduced its holdings of US debt by $23 billion to $980.8 billion in May/April, for the sixth month in a row. It is the first time that total debt has fallen below $1 trillion in 12 years.

China benefits from being Taiwan’s largest trading partner by penalizing exporters, boycotting some Taiwanese goods, or restricting bilateral trade. Which is what happened. Prior to Pelosi’s arrival, China on Monday banned food imports from more than 100 Taiwanese suppliers, according to local newspaper United Daily News. It also suspended some commercial dealings with Taiwan today.

However, it appears that China will be cautious with the island, as it needs Taiwan semiconductors. The latter owns the Taiwan Semiconductor Manufacturing Corporation (TSMC), the world’s largest semiconductor contract manufacturing company. It represents more than 50 percent of this market globally, which includes only companies that manufacture chips for other companies. Its customers include Apple, which relies on Taiwanese chips to make iPhones.

And the British newspaper, “Daily Mail”, quoted experts who feared any escalation by China, “The world’s most advanced chip factory, on the island of Taiwan, will become inoperable, which will lead to a shortage of smartphones, computers and sensors in cars,” it said.

And Apple’s chip maker, the Taiwanese semiconductor maker, has warned that a war between Taiwan and China is a losing proposition for everyone, which will inevitably lead to more economic turmoil.

TSMC President Mark Liu said earlier this week that the chip production plant would not be able to operate if China decided to launch a military operation in Taiwan. In an interview with CNN, Liu added, “Because TSMC is a sophisticated manufacturing facility, it relies on communication with the outside world, with Europe, Japan and the United States, from chemicals to spare parts to engineering and diagnostic software.”

He urged Beijing to think twice before taking any action, because China accounts for 10 percent of TSMC’s business, stressing that this will lead to a crisis The supply chain may extend as far as the United States.

A prominent Chinese economist in one of the Chinese government’s research groups urged the authorities in June to seize the Taiwanese company if the United States imposed sanctions on China similar to those imposed on Russia.

This is one of the most prominent statements so far showing the way the Taiwan chip industry is perceived in Beijing, as being one of the key strategic assets in the fierce competition between the world’s two largest economies.

China is making great efforts to develop an integrated semiconductor original industry, as part of its quest to become a global semiconductor production leader. From here, it is possible to understand the concern of the United States of America about the Chinese control of this sector after the erosion of its share in the manufacture and production of semiconductors from 37 percent of global production in 1990 to reach only 12 percent today.

The US Congress has submitted several legislations to facilitate and support this sector in the United States, the last of which was a few days ago, when the Senate passed a $52 billion “Chips-plus” bill to support American semiconductor producers and developers.

In any case, the world is awaiting the extent to which tensions in the region will reach, especially since Chinese President Xi Jinping warned during a call with his American counterpart Joe Biden last year not to “play with fire” over Taiwan. And he told him: “Those who play with fire will be burned with it. We hope that the American side will realize this clearly,” according to what was reported by Chinese media.