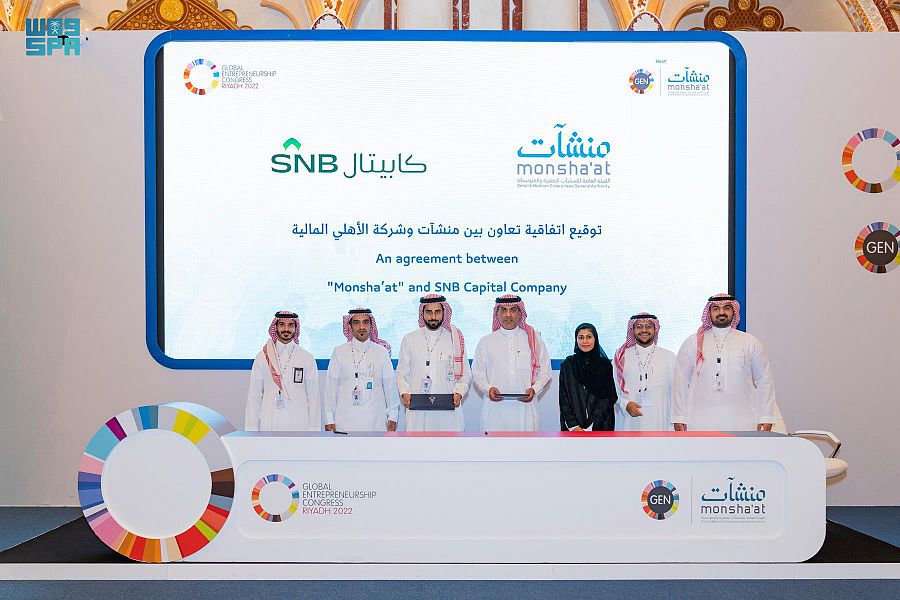 On day 3 of the Global Entrepreneurship Congress (GEC) in Riyadh, organizers reported that several programs were signed, initiatives launched and agreements inked with a total value of more than six billion Riyals in support of the SME sector and entrepreneurship.

The Small and Medium Enterprises Financing Guarantee Program “Kafalah” signed a number of agreements with a number of ministries as well as public and private sector institutions.

The conference which ends today will discuss a number of targeted topics during its activities, in the presence of entrepreneurs, investors, experts and decision-makers participating from 180 countries.

On the third day, “Monsha’at” signed several joint cooperation agreements with the Health Insurance Council and the Saudi Commission for Health Specialties, as well as the Food and Drug General Authority.

In order to support and empower entrepreneurs and small and medium enterprises, the National Industrial Development and Logistics Program also launched the “Thousand Miles” initiative in order to qualify entrepreneurs in the industrial and logistics sector in cooperation with the relevant authorities

It also witnessed the launch of the fourth batch of influential mentorship programs, in cooperation with Endeavor Saudi Arabia, to support rapidly growing enterprises by facilitating access to the best mentors in local and global networks and linking with Endeavor offices in regional and global markets. The program aims to support more than 26 accelerating establishments represented by 35 Saudi entrepreneurs, with a total of more than 400,000 direct and indirect jobs.

It is noteworthy that with the participation of more than 20 rapidly growing Saudi establishments, the sixth batch of Elite ambition was launched in cooperation with the global “Elite” network. The program aims to qualify 4 to 6 companies for public listing in the parallel stock market “Nomu”.

Scheiser Power Mobile Energy also signed a cooperation agreement with the European “Micatel” group to manufacture and supply electric vehicle chargers in the Kingdom of Saudi Arabia and the Middle East region.