The ship is carrying 750 tons of fuel, threatening environmental disaster 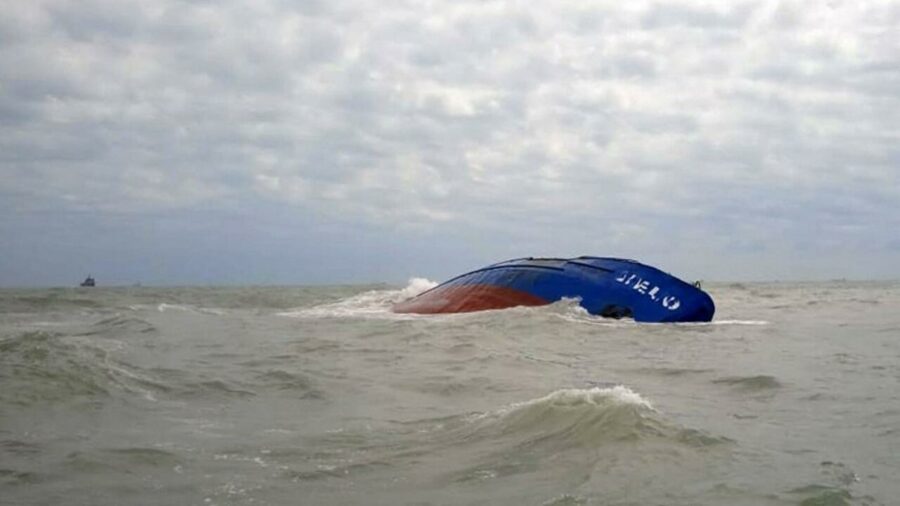 The cargo ship, Xelo, in the Gulf of Gabes, off Tunisia’s southeast coast.

The Tunisian authorities continue their efforts to keep control of the situation following the sinking of the merchant fuel ship “Xelo” off the coast of Gabes in the country’s south.

The ship, which was carrying between 750 and 1,000 tons of petroleum, sank due to bad weather, according to the Tunisian Ministry of Environment.

All seven crew members were rescued by the Tunisian Navy.

Tunisian Transport Minister Rabie Majidi said that the authorities are investigating the ship’s crew to find out all the data regarding its entry into territorial waters, the reason for changing the crew, and how the accident occurred from the beginning, but “most importantly, we did not record any oil spill until now.”

The conflicting information about the ship’s sinking sparked outrage and speculation of a “contrived sinking incident,” which may conceal suspicions of international oil smuggling or the disposal of hazardous trash.

On suspicion of the possibility of international smuggling, Hamdi Chaaban, a member of the Tunisian Forum for Economic and Social Rights, denied these allegations, stating that the incident, “Is not related to smuggling as much as it is the crime of excreting and polluting waste on the Tunisian coasts.” He added that “The matter is much more dangerous than the Italian waste issue.”

According to a report published by “France 24,” Italian company Sviluppo Risorse Ambientali (SRA) exported, in May 2020, 282 containers of domestic waste to Tunisian ports. The cargo was destined for “Soriplast” without the slightest regard for international laws and norms.

Moreover, Euronews reported that Tunisia’s Environment Ministry announced last February it signed an agreement with Italy to return containers of household waste that have been illegally imported since 2020.

Hamdi Hashad, an environmental specialist, said that nearly 300,000 tons of oil are globally dumped every single year into the water.

Hashad explains that oil does not mix with water, but rather floats on top of it and forms a very thin coating that prevents sunlight from reaching the microscopic marine organisms, which are at the center of the food chain, resulting in the death of all fish.

Hashad points out that if the oil leaks, the amount of oxygen in the sea will be reduced, resulting in the death of a huge number of marine organisms in the region.