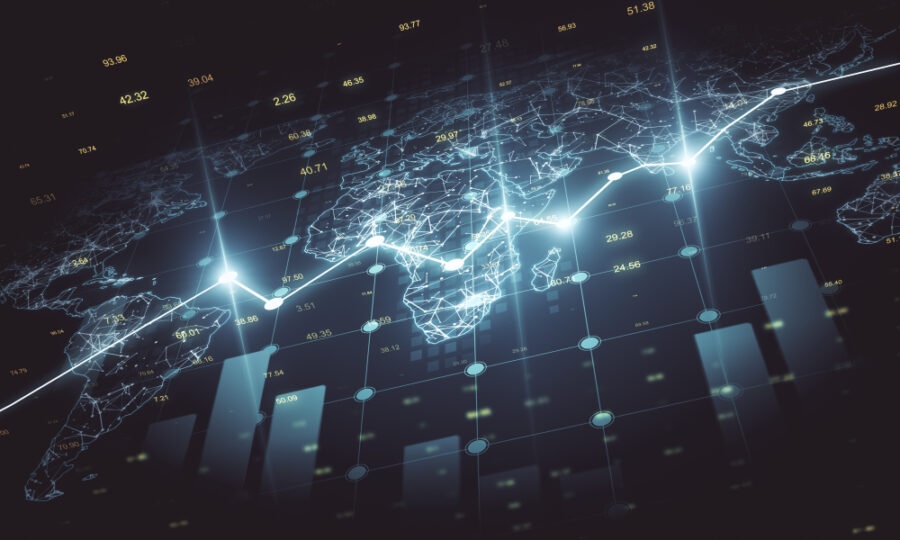 As per the weekly report released by the Arab Federation of Capital Markets (AFCM), covering the week of February 28, Russia’s escalating war in Ukraine has sent commodity and energy prices soaring, boosted safe-havens, and impacted Europe’s common currency and global stock markets.

Prices of raw materials from wheat to various metals have soared to multi-year highs as Western sanctions have disrupted air and sea shipments of commodities produced and exported by Russia.

In parallel, Brent crude prices rose another 21% over the week, closing at their highest since 2013 to near $120 a barrel, with buyers and shippers increasingly shunning Russian oil supplies which total up to five million barrels per day. Gold rose on Friday, eyeing its best weekly gain since May 2021, while 10-year US Treasury yield fell to near 1.7% on demand for safe-havens.

The 10-year US Treasury yield fell as low as 1.68% on Tuesday, with investors rushing into safe-haven investments, as Russia continued its invasion of Ukraine. However, US Treasury yields rose sharply last Wednesday as traders dumped traditional safe havens and loaded up on riskier assets like stocks, this move in bonds came as stocks rallied perhaps in anticipation of the Ukraine-Russia situation taking a turn for the better soon.

The yield on the benchmark 10-year Treasury note moved higher to 1.89%. That marks the rate’s biggest one-day jump since March 2020, before slumping again to around 1.73% on Friday, as investors continued to buy safe-haven assets amid the Russia-Ukraine conflict. The decline in yields came even after a strong jobs report as nonfarm payrolls for January grew by 678,000 and the unemployment rate was 3.8%, the Labor Department’s Bureau of Labor Statistics reported Friday. That compared to estimates of 440,000 for payrolls and 3.9% for the jobless rate, as per Dr. Fadi Kanso, the head of research at AFCM.

In parallel, Russia’s escalating war in Ukraine has hammered Europe’s common currency and its stock markets. The euro fell below US$ 1.10 on Friday for the first time in almost two years, having shed over 3% against the dollar over the week for its biggest weekly fall since March 2020. Turmoil in European markets heightened uncertainty over the economic outlook and a scaling back of rate-hike bets meant investors were keen to snap up safe-haven bonds. In Germany, the euro area’s benchmark bond issuer, 10-year bond yields fell 30 bps over the week in their biggest one-week fall since the euro debt crisis in 2011.

Wall Street ended lower on Friday as the war in Ukraine overshadowed an acceleration in U.S. jobs growth last month that pointed to strength in the economy. Most of the 11 major S&P sector indexes declined, with financials leading the way with a 2% drop as investors worried about how the West’s sanctions against Moscow may affect the international financial system. The S&P 500 banks index fell 3.4%, bringing its loss for the week to nearly 9%, its worst weekly decline since June 2020. Dow fell by 1.3%, while the Nasdaq gave up 2.8%. In parallel, stock markets across Asia were also in a sea of red, with Japan losing 2.4%, South Korea 1.2%, China 0.9%, and Hong Kong 2.5%.

Oil prices rebounded on Friday as the disruption of Russian oil exports because of western sanctions outweighed the prospect of more Iranian supplies from a possible nuclear deal. International benchmark Brent crude futures jumped to $116.6 per barrel, after earlier crossing the $119 level. Oil is rising on fears that Western sanctions on Russia over the Ukraine conflict will disrupt shipments from Russia, which is the world’s biggest exporter of crude and oil products combined. Trading activity for Russian crude oil already appears frozen as buyers are hesitant in making purchases because of the sanctions.

It is worth mentioning that oil prices continued to surge in this Monday morning trade as the market reacted to supply disruptions stemming from Russia’s ongoing invasion of Ukraine and the possibility of a ban on Russian oil and natural gas. In fact, oil prices exceeded the $140 mark on Monday, for the first time since 2008, while British and European gas prices both hit record highs on Friday as the war in Ukraine continued to wreak havoc on energy markets, threatening to exacerbate the cost of living crisis, while US Gas prices top $4 a gallon nationwide, all-time record could be broken this week, as per Kanso.

On another note, Brent crude could end the year at $185 a barrel if Russian supply continues to be disrupted, JPMorgan Chase & Co wrote in a note on Thursday. Currently, 66% of Russian oil is struggling to find buyers. In the short term, the scale of the supply shock is so large that oil prices need to reach and stay at $120 a barrel for months to incentivize demand destruction, the analysts said, assuming there would be no immediate return of Iranian crude barrels. “As sanctions have widened and the shift to energy security takes on an urgent priority, there will likely be ramifications for Russian oil sales into Europe and the US, potentially impacting up to 4.3 million barrels per day,” the analysts wrote.

Gold prices hit a fundamental level, while palladium prices jumped to a record high as intensifying Russia-Ukraine conflict and the response of Western countries has fueled tight supply of certain precious metals and has pushed investors towards safe-haven assets. Spot gold prices jumped to $1,970 per ounce by the end of the week, yet crossing $2,000 mark in early trades on Monday. Palladium extended its rally to near a 10-month high within striking distance of $3,000 an ounce on Friday, as concerns over supply shortages from top-producer Russia mounted and the war in Ukraine bolstered demand for safe-haven gold.

Prices of raw materials from wheat to various metals have soared to multi-year highs as Western sanctions have disrupted air and sea shipments of commodities produced and exported by Russia. Russia and Ukraine are two of the world’s biggest exporters of wheat, which scaled a 14-year peak on Friday, having gained nearly 40% since Russia invaded Ukraine on Feb. 24. Russia is also a supplier of metals, aluminium hit a record high on Friday while copper, where the country supplies 3.5% of world supplies, was also flirting with a fresh all-time peak, as per Kanso.