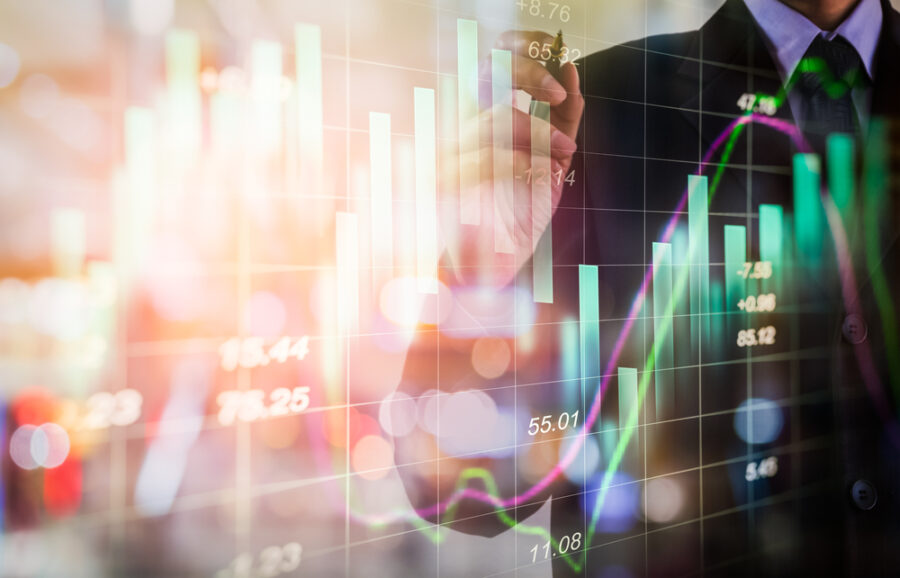 As per the weekly report issued by the Arab Federation of Capital Markets (AFCM) over the previous week, global financial markets representing stocks and U.S. bond yields dove on Thursday, while the dollar, gold, and oil prices rocketed higher as Russian forces fired missiles at several Ukrainian cities and landed troops on its south coast.

The equities from the United States to Europe and Asia recorded losses, with a sharp jump in commodity prices adding to worries about inflation and risks to economic growth. At the same, immediate geopolitical threats weighed on U.S. yields on Thursday, pushing the benchmark U.S. 10-year yield down sharply to 1.868% from its U.S. close of 1.977% on Wednesday.

US Treasury yields dropped sharply in early trading on Thursday, as investors flocked to the safe-haven asset of government bonds, pushing the 10-year and 30-year yields down more than 10% in morning trading.

The yield on 10-year Treasury notes fell to 1.846%, on track for its biggest daily drop since late November, while the U.S. dollar strengthened, up almost 1% against major currencies. However, the U.S. 10-year Treasury yield rose again to 2.007% on Friday before retreating partially to trade at 1.98%, as per Dr. Fadi Kanso, head of Research at AFCM.

In parallel, global stocks dove sharply on Thursday. The Euro Stoxx 50 futures and German futures were down more than 3.5% in early deals, while FTSE futures were 2% lower. S&P 500 were down 2.3% and Nasdaq futures fell 2.8%. T

he Moscow Exchange announced a suspension of all trading on Thursday. In Asia, MSCI’s broadest index of Asia-Pacific shares outside Japan fell more than 3.2% to its lowest level since November 2020. Australian shares shed more than 3% and Chinese blue chips lost 2%.

However, stocks around the world rebounded on Friday, the U.S. dollar fell and oil prices dipped as investors welcomed talk of renewed diplomacy after Russia’s invasion of Ukraine, and as coordinated Western sanctions left Russia’s energy sector largely untouched.

The Russian ruble has slumped by 30% against the US dollar after Western nations announced new sanctions against Russia over its invasion of Ukraine. The new record low for the Russian currency comes after some of the country’s banks were banned from using the Swift international payment system.

On Sunday, Russia’s central bank appealed for calm amid fears that there could be a run on the country’s banks. The move by the European Union, United States, and their allies to cut off a number of Russian banks from Swift is the harshest measure imposed to date on Moscow over the Ukraine conflict. The assets of Russia’s central bank will also be frozen, limiting the country’s ability to access its overseas reserves.

Oil prices surging above $100 a barrel after Russia invades Ukraine

Oil prices soared nearly US$ 2 per barrel in early trade on Friday as Russia’s invasion of Ukraine continued to inflame global supply concerns as markets brace for the impact of trade sanctions on major crude exporter Russia. Global benchmark Brent crude rose to $101.1 a barrel. West Texas Intermediate (WTI) crude climbed to $94.7 a barrel. The attack on Ukraine caused prices to surge to more than $100 a barrel for the first time since 2014 on Thursday, with Brent touching $105, before paring gains by the close of trade.

Oil prices slipped on Friday to below $100 a barrel, after sharp rises early in the session on concern over potential global supply disruptions from sanctions on major crude exporter Russia. Russia will not have its oil and gas flows specifically targeted by sanctions, a U.S. official said. The country is the world’s second-largest crude producer and a major natural gas provider to Europe, providing about 35% of its supply. U.S. officials have been working with oil-producing nations from the Organization of the Petroleum Exporting Countries (OPEC) and with large oil-consuming countries to respond if needed to calm energy markets.

Gold prices rose on Thursday towards an 18-month high hit, to above $1,970 per ounce, as investors sought refuge in safe havens, traditionally a safe haven in times of uncertainty, after Ukraine declared an emergency and the West imposed more sanctions on Russia for sending troops into eastern Ukraine, before witnessing sharp downward movement on Friday.

Meanwhile, the prices of major cryptocurrencies continued their slump over the week as the Russia-Ukraine crisis boiled over and crypto buyers and other investors sought safer havens like the U.S. dollar and gold. Like stocks, Bitcoin slumped in early trading on Thursday but recovered later in the day, as per Dr. Kanso.

In parallel, commodities from wheat to aluminum rallied over the week. Wheat rose to near its highest level in more than 13 years, while aluminum and nickel also surged. In fact, Russia and Ukraine together account for nearly 25% of global wheat exports, almost 20% of corn exports, and 80% of sunflower oil exports, while Russia is also a major supplier for a swathe of commodities, including aluminum, nickel, and palladium.

Furthermore, as the war intensifies, the risk of logistical turmoil is also rising fast across commodity markets, with insurers either refusing to offer cover for vessels sailing into the Black Sea, or demanding huge premiums to do so.