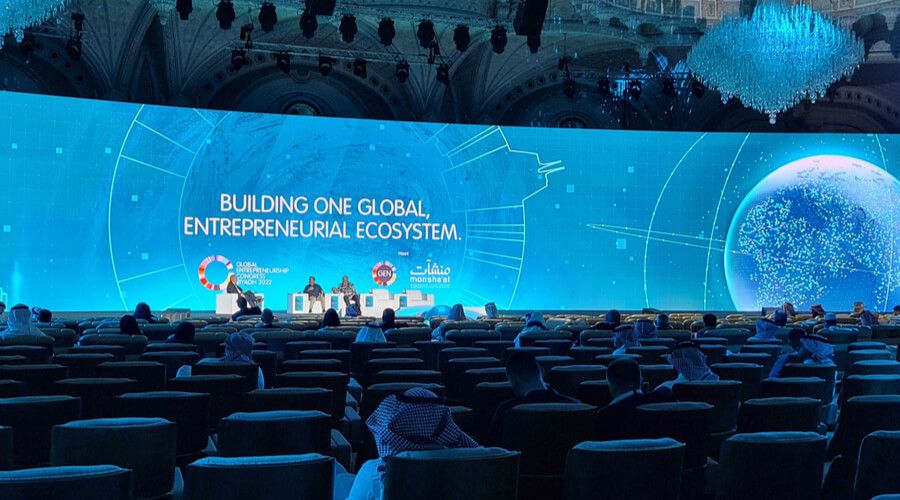 The agreements which amounted to more than 51.8 billion riyals (equivalent to $13.8 billion), aimed to promote entrepreneurship in various fields, as well as to enhance Saudi’s position as an attractive environment for pioneers, innovators, and creators from around the world.

GEC2022 was held under the patronage of Prince Mohammed bin Salman bin Abdulaziz, Crown Prince, Deputy Prime Minister and Chairman of the Council for Economic and Development Affairs.

The event was organized by the General Authority for Small and Medium Enterprises (Monshaat), in cooperation with the Global Entrepreneurship Network (GEN).

The Social Development Bank (SDB) signed agreements with several parties, including the Royal Commission for Jubail and Yanbu (RCJU), and the National Entrepreneurship Institute (NEI). In this context, SDB announced the launch of a series of products and initiatives to support and empower entrepreneurs with more than 11 billion riyals (up to $3 billion).

During the event, “Monshaat” approved a budget for financing the SMEs’ sector, which amounted to 12 billion riyals ($3.2 billion).

In addition, “Monshaat” signed a cooperation agreement with Al-Rajhi Bank, worth two billion riyals (more than $533 million), to inaugurate innovative financing programs and products. It also signed similar agreements with the Arab National Bank (ANB) to release innovative financing programs and products, with a value of more than one billion riyals (more than $293 million). Moreover, “Monshaat” initiated a credit card product for small SMEs with an amount of up to 50 million riyals ($13 million).

Meanwhile, the Ministry of Investment of Saudi Arabia (MISA) announced the launch of a set of investments and licenses for many international companies to enter the Saudi market. Experts estimate investments at 3.51 billion riyals (more than $936 million).

The congress also included the release of the total value of innovative banking and financing programs for the next five years, which amounted to more than 7.3 billion riyals ($2 billion).

SNB to initiate financing products worth of one billion riyals

On the other hand, the Small and Medium Enterprises Financing Guarantee Program (Kafalah) signed 12 cooperation agreements, in addition to several memoranda of understanding, for a value of 6 billion riyals ($1.6 billion). The agreements included a cooperation understanding with the Ministry of Industry and Mineral Resources (MIMR), the Ministry of Municipal and Rural Affairs (MOMRA), the Ministry of Sports (MOS), the Cultural Development Fund (CDF), the Tourism Development Fund (TDF), the National Industrial Development and Logistics Program (NIDLP), King Saud University (KSU), Jouf University, and the Business Incubators and Accelerators Company (BIAC).

Entrepreneurs from more than 180 countries participated in the congress.

The event hosted more than 145 dialogue sessions. A total of 293 speakers took part in the sessions. The event also hosted 39 workshops in the presence of senior government officials.