Investors are concerned about the possibility of US policy tightening 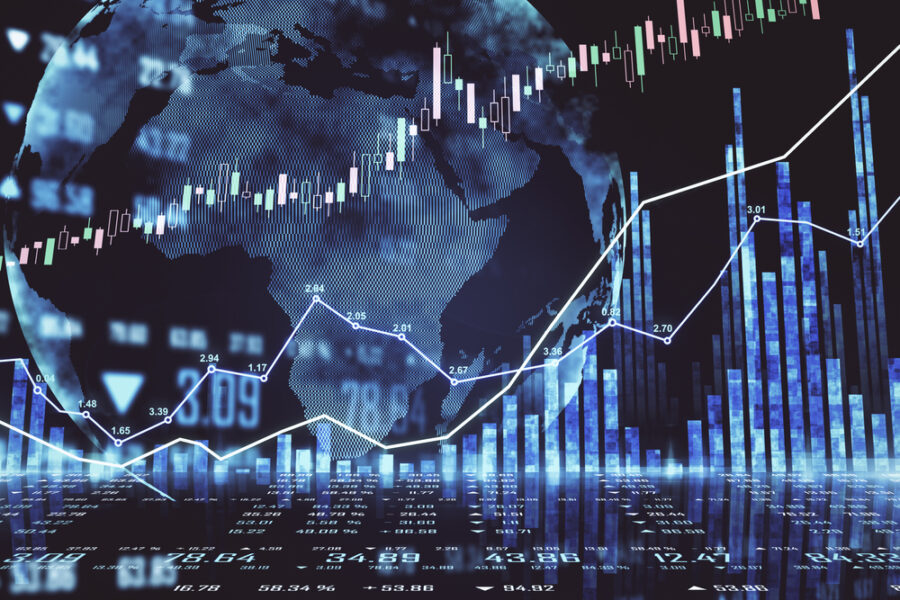 As per the weekly report released by the Arab Federation of Capital Markets (AFCM), over the previous week, U.S. stocks fell to close out another week in the red as investors faced more aggressive monetary tightening by the Federal Reserve in coming months, through a potential 50-point climb in rates in May.

Oil prices slumped to near two-week lows by the end of the week, extending losses from last week, as concerns grew that prolonged COVID-19 lockdowns in Shanghai and potential U.S. rate hikes would hurt global economic growth and fuel demand. In parallel, gold prices fell over by 5% over the week, as a stronger US dollar and rising Treasury yields overshadowed inflows into the safe-haven metal.

On another note, the International Monetary Fund on Tuesday cut its global growth projections for 2022 and 2023, saying the economic hit from Russia’s unprovoked invasion of Ukraine will propagate far and wide. The IMF is now projecting a 3.6% GDP rate for the global economy this year and for 2023. This represents a 0.8% and 0.2% drop, respectively, from its forecasts published in January. The World Bank also cut its global growth expectations on Monday, now estimating a growth rate for 2022 of 3.2%, down from 4.1%.

In parallel, the U.S. dollar rose from a one-week low on Thursday after Federal Reserve Chair Jerome Powell’s comments. The US dollar index, which gauges the strength of the currency versus a basket of rivals, gained 0.2% to 100.5. The index has advanced 2.3% so far this month, on pace for its best monthly gain since June 2021. The euro slid from a more than one-week high after European Central Bank President Christine Lagarde said the ECB may need to cut its growth outlook further as the fallout from Russia’s invasion of Ukraine weighs on households and businesses.

Lagarde’s comments were in contrast to hawkish comments from ECB officials who seemed to suggest European Central Bank officials raised bets that eurozone interest rates will rise soon. On another note, Asian shares tumbled on Friday as investors worried about an increasingly aggressive rate-hike outlook for the United States as well as the fallout for the global economy from lockdowns in China. MSCI’s broadest index of Asia-Pacific shares outside Japan fell by 1.1% in morning trade, its sharpest decline in six weeks. Pulling it lower was a 1.6% loss for Australia’s resource-heavy index, a 1.1% drop in Hong Kong stocks, and a 0.3% retreat for blue chips in mainland China while Japan’s Nikkei lost about 2%.

Oil prices slipping by 5% on growth and demand concerns

Oil slipped over the past week, posting a weekly loss of nearly 5%, on the prospect of weaker global growth, higher interest rates, and COVID-19 lockdowns in China hurting demand even as the European Union considers a ban on Russian oil that would tighten supply. Brent crude was down at $107 a barrel while West Texas Intermediate (WTI) crude declined to US$ 102.4 a barrel. In fact, the IMF cut its global economic growth forecast for 2022, the German government will cut its growth forecast for 2022 to 2.2% from 3.6%, while Chinese demand for gasoline, diesel, and aviation fuel in April is expected to slide 20% from a year earlier, as many of China’s biggest cities, including Shanghai, are in COVID lockdowns.

However, on the supply side, the Russia-Kazakh Caspian Pipeline Consortium (CPC) is expected to resume full exports from April 22 after almost 30 days of disruptions. Still, supply tightness provided support to the prices as Libya loses 550,000 barrels per day (bpd) of output due to disruptions. However, supply could be squeezed further if the EU imposes an embargo on Russian oil. As such, Morgan Stanley raised its third-quarter Brent price forecast by $10 per barrel to $130, citing a “greater deficit” this year due to lower supply from Russia and Iran, which is likely to outweigh short-term demand headwinds.

Gold prices near two-week low on firmer US dollar

Gold prices dipped on Monday to their lowest in more than two weeks, as bets for an increasingly aggressive US Federal Reserve approach to tightening monetary policy boosted the US dollar and pressured demand for bullion. Spot gold was down at $1,928 per ounce and US gold futures were down at $1,930. It is worth mentioning that gold prices rose to near the key mark of $2,000 per ounce on Monday on safe-haven demand and mounting worries over inflation, but have since pulled back to hit a two-week low by Friday.

In parallel, the global cryptocurrency market recorded a marginal dip last week amid the hawkish remarks of Fed chief Jerome Powell and the US central bank’s intention of being aggressive to tackle inflation. This prompted all major crypto coins to lose value, as the top 10 tokens traded in the red. Bitcoin slipped below the $40,000 mark as exchanges saw significant selling volumes with the crypto markets weakening, overall. The drop in the BTC price could, most likely, be due to traders booking profits with Bitcoin climbing above $42,000 earlier.  Ether price also went down to below the $3,000 mark to stand at $2,930 on Sunday.