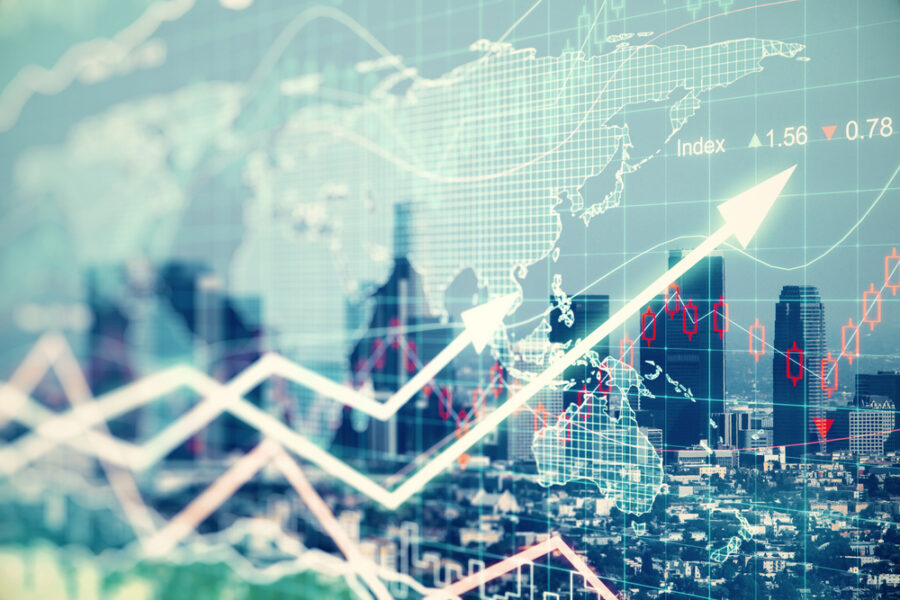 As per the weekly report released by the Arab Federation of Capital Markets (AFCM), over the previous week, US bond yields resumed their upward climb on Friday as a key part of the U.S. Treasury yield curve inverted once more on signs of persistent inflation.

An inversion of the yield curve, when shorter-dated yields rise above longer-dated ones, is seen as a harbinger of a recession in the next one or two years. On another hand, falling oil prices ended the week with their sharpest weekly drop in two years, ahead of a meeting of International Energy Agency member nations discussing a release of emergency oil reserves alongside a huge planned release by the United States. The US dollar has benefited from safe-haven flows and expectations of rising U.S. rates against a basket of peers.

The 2-year and 10-year Treasury yields inverted for the first time since 2019 on Thursday, sending a possible warning signal that a recession could be on the horizon. The bond market phenomenon means the rate of the 2-year note is now higher than the 10-year note yield after jobs data caused short-term rates to rise at a faster pace than long-term rates, as investors selling out of short-dated Treasuries in favor of long-dated government bonds signals concerns about the health of the economy.

The 2-year to 10-year spread was last in negative territory in 2019 before pandemic lockdowns sent the global economy into a steep recession in early 2020. The 2-year and 10-year part of the yield curve inverted Thursday night, then it went back to a normal state overnight before the jobs report Friday morning caused short-term rates to rise at a faster pace than long-term rates, as per Dr. Fadi Kanso, the head of research at AFCM.

The data showed a strong economy for now, but investors are worried that it will also give the green light to the Federal Reserve to follow through on its aggressive plan to hike rates at every meeting this year. And those rate hikes could eventually slow the economy over the long term.

Asian, US, and European shares

Asian shares fell on Friday following the biggest quarterly drop in global equities in two years, as investors worried about the impact of the Russian-Ukrainian war and rising risks of a recession. Reflecting the gloomy mood as a result of supply disruptions and surging raw material costs, Japanese business confidence hit a nine-month low in the first quarter according to a Bank of Japan survey, with companies indicating they expect conditions to worsen further.

In parallel, MSCI’s global share index, and U.S. and European shares all notched their biggest quarterly drops since the outbreak of the COVID-19 pandemic in 2020 in the quarter that ended on March 31. Investors have been worried that surging price pressures could force global central banks into aggressive rate hikes, potentially triggering recessions.

Oil prices fell 7% to close just above $100 on Thursday as President Joe Biden announced the largest ever release from the U.S. Strategic Petroleum Reserve with a release of 1 million barrels per day for six months starting in May, and called on oil companies to increase drilling to boost supply. On Friday, the two benchmark contracts were each headed for a weekly loss of around 13%, their biggest in two years, as members of the International Energy Agency (IEA) agreed to join in the largest-ever U.S. oil reserves release, but did not agree on volumes or the commitments of each country at their emergency meeting. Both Brent and US WTI crude benchmarks settled down around 13% in their biggest weekly falls, at $104.4 a barrel and $99.3 consecutively.

OPEC and allies including Russia agreed on Thursday to another modest monthly oil output boost, resisting pressure to pump more, with plans for an increase of 432,000 bpd to their May output target despite Western pressure to add more. The group has resisted repeated calls by the US and the IEA to pump more crude to cool prices that climbed close to an all-time high after Washington and Brussels imposed sanctions on Moscow following its invasion of Ukraine. In parallel, just as the IEA was working on the release of new stock, OPEC+ decided to stop using IEA’s data, replacing it with reports from consultancies Wood Mackenzie and Rystad Energy.

Gold prices fell on Friday as the dollar and Treasury yields firmed after a solid U.S. payrolls report raised expectations of aggressive rate hikes, although the Ukraine crisis and talks of more sanctions against Russia supported safe-haven demand. A stronger dollar makes gold less attractive for other currency holders, while higher yields increase the opportunity cost of holding non-paying bullion. Spot gold was down at $1,917.6 per ounce and U.S. gold futures slipped to $1,920.3 per ounce. It is worth mentioning that gold was headed, on Thursday, for its biggest quarterly gain since the pandemic-led surge in mid-2020 as concerns over soaring consumer prices and the Ukraine crisis bolstered bullion’s safe-haven appeal, as per Kanso.

The global cryptocurrency market fell sharply on Friday amid persistent inflation concerns and an unfavorable vote by the European Union (EU) on crypto legislation. The ongoing conflict between Russia and Ukraine along with the selloff in the equity markets also dampened the risk appetite of investors. All of the crypto tokens bled in the early hours on Friday. Shiba Inu plunged over 10%, whereas Terra, Dogecoin, Avalanche and Cardano fell 7% each. Bitcoin and Ethereum declined 5% each. The global cryptocurrency market cap tumbled to $2.04 trillion, falling as much as 6% on Friday.