IMF cuts 2023 growth outlook: The worst is yet to come

The Arab Gulf economies are going against stagnation, inflation 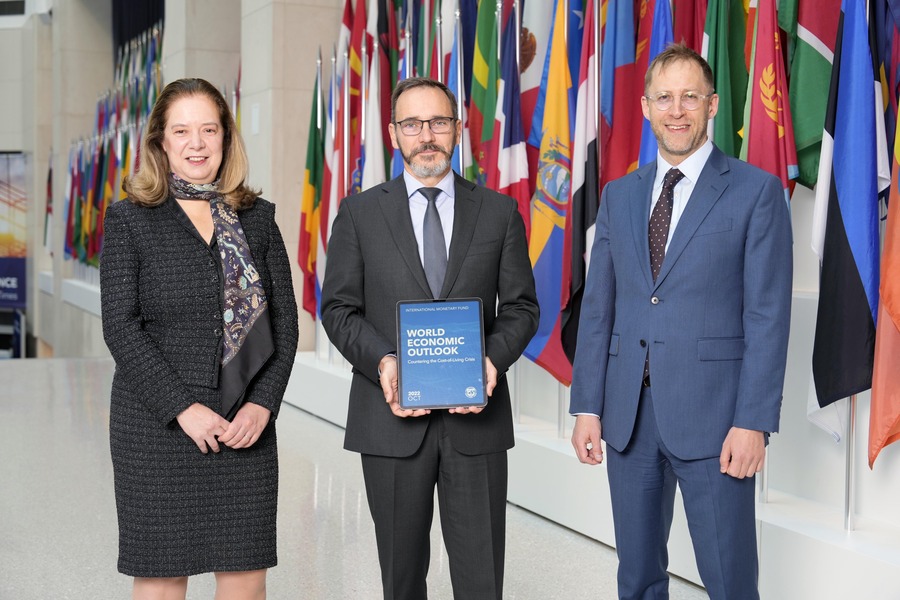 IMF experts preparing for the launch of the World Economic Outlook

The International Monetary Fund (IMF) predicts global growth will slow to 2.7% next year, 0.2 percentage points lower than its July forecast, and anticipates 2023 will feel like a recession for millions around the world.

Aside from the global financial crisis and the peak of the Covid-19 pandemic, this is “the weakest growth profile since 2001,” the IMF said in its World Economic Outlook published Tuesday. Its GDP estimate for this year remained steady at 3.2%, which was down from the 6% seen in 2021.

The IMF anticipates global inflation will peak in late 2022, increasing from 4.7% in 2021 to 8.8%, and that it will “remain elevated for longer than previously expected.”

In its report, the Fund urged monetary policy to continue working to restore price stability while directing public fiscal policy toward relieving pressures caused by rising living costs, as long as its stance remained sufficiently tight in line with monetary policy.

Structural reforms can play an additional role in fighting inflation by improving productivity and reducing supply shortages,” he said, adding that “multilateral cooperation is a necessary tool to accelerate the transition to green energy and prevent fragmentation, the report noted.

“The worst is yet to come, and for many people, 2023 will feel like a recession,” the report said, echoing warnings from the United Nations, the World Bank, and many global CEOs.

More than a third of the global economy will see two consecutive quarters of negative growth, while the three largest economies — the United States, the European Union, and China — will continue to slow, the report said.

In its report, the IMF laid out three major events currently hindering growth: Russia’s invasion of Ukraine, the cost-of-living crisis, and China’s economic slowdown. Together, they create a “volatile” period economically, geopolitically, and ecologically.

The war in Ukraine continues to “powerfully destabilize the global economy,” according to the report, with its impacts causing a “severe” energy crisis in Europe, along with destruction in Ukraine itself.

For emerging markets and developing economies, the shocks of 2022 will “re-open economic wounds that were only partially healed following the pandemic,” the report said.

The price of natural gas has more than quadrupled since 2021, as Russia now delivers less than 20% of 2021 levels. Food prices have also been pushed up as a result of the conflict.

China’s “zero-Covid policy” — and its resulting lockdowns — continue to hamper its economy. Property makes up around one-fifth of China’s economy, and as the market struggles the ramifications continue to be felt globally.

The world economy is historically fragile

The IMF also highlighted that the risk of monetary, fiscal, or financial policy “miscalibration” had “risen sharply,” while the world economy “remains historically fragile” and financial markets are “showing signs of stress

The report Tuesday suggested “front-loaded and aggressive monetary tightening” is needed, but that a “large” downturn is not “inevitable,” citing tight labor markets in the U.S. and U.K.

The economy of the region

Furthermore, the IMF announced that Saudi Arabia, the Arab world’s largest economy, is on track to achieve the highest economic growth rate among G-20 countries in 2022, at 7.6 percent. This optimistic outlook extends to the rest of the Gulf Arab states, which are benefiting from rising oil prices.

According to the report, Kuwait achieved the highest jump in terms of expected growth this year, which will reach 8.7 percent, up from 5.7 percent in the April forecast issued during the semi-annual spring meetings of the IMF and the World Bank. The UAE economy is expected to grow by 5.1 percent this year, Oman by 4.4 percent, and Qatar and Bahrain by 3.4 percent.