Georgieva: Our global economy is like a ship sailing amid crashing waves 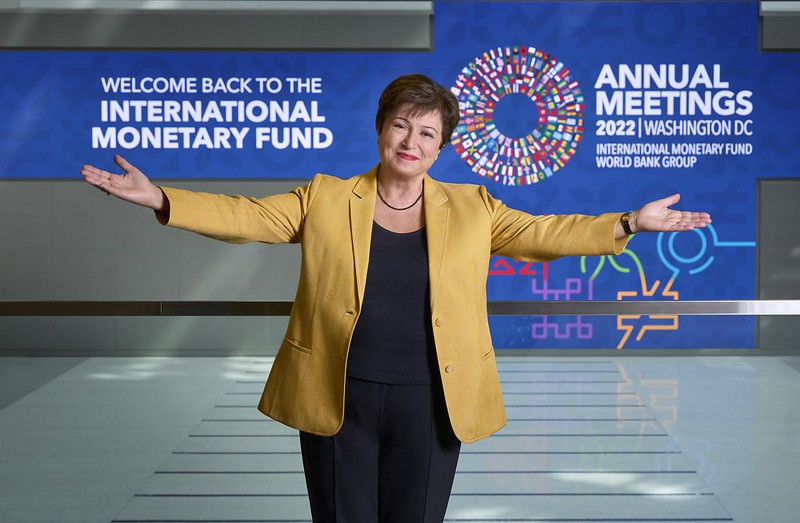 The IMF and world bank annual meetings start on monday

When they gather in Washington next week for the annual meetings of the International Monetary Fund and the World Bank Group, the world’s finance ministers and central bank governors face what is described as a multiple, complex crisis: an increase in interest rates and the strength of the dollar, shortages of food supplies, high inflation, the pandemic that still prevails, and climate change. Taken together, they threaten not only the global economy but also the livelihoods of hundreds of millions.

The annual meetings of the Boards of Governors of the International Monetary Fund and the World Bank Group begin Monday during which time central bank governors, finance and development ministers, parliamentarians, senior officials from the private sector, representatives of civil society organizations, and academics discuss the global economic outlook in light of the serious developments in the global economy.

This year’s events will run in Washington, D.C., until October 16, and will be held in person for the first time in more than two years.

This year’s meetings, despite their usual annual importance, come at a very sensitive time. The United States is likely to enter a recession next year; Europe will suffer from rising energy costs, while China will suffer its lowest growth in decades. Thus, a significant slowdown in the global economy is almost inevitable.

This means that the challenge for both the IMF and the World Bank is not just to discuss the new financing they can provide and the mechanisms of that financing, but to provide dramatically increased support to keep up with this phase.

In addition to Ukraine’s need for continued support, the war has led to higher prices for food, energy, and fertilizers. All of this strains the budgets of the most vulnerable low- and middle-income economies. There will be more challenges as interest rates rise, exports to the industrialized world decline, and dwindling global liquidity make it difficult to attract capital.

To “avoid successive deflation, rapid and substantial new funding will be needed,” Lawrence Summers (former U.S. Treasury secretary) and Masoud Ahmed, who previously served as a senior official at the World Bank and the International Monetary Fund, said in a joint article in The Washington Post.

A total of 140 civil society groups sent a letter to the IMF’s board on Thursday saying the IMF should issue $650 billion in new emergency reserves to help member states cope with overlapping health, food, energy and inflation crises.

The International Monetary Fund said in July that a new version of SDR reserves was among the options to help countries struggling with the fallout from Russia’s war in Ukraine.

“Venturing into a more fragile world”

IMF President Kristalina Georgieva has warned of the growing risks of recession, as the IMF lowers its growth forecast for next year and expects a loss in global production of about $4 trillion between now and 2026.

In a speech at Georgetown University in Washington on Thursday titled “Entering a More Fragile World,” she said: “In less than three years we have lived trauma, and shock after shock.”

“We are going through a fundamental transformation of the global economy: from a relatively predictable world under a rules-based framework governing international economic cooperation, low interest rates, low inflation, to a more fragile world – involving a greater degree of uncertainty, a higher level of economic volatility, geopolitical confrontations, and more frequent and destructive natural disasters – a world in which any country can be derailed more easily and frequently,” she warned.

“Most economists, including the International Monetary Fund, believed that the recovery would continue and that inflation would subside quickly – largely because we expected that vaccines would help tame supply-side disruptions and allow production to recover,” Georgieva said.

“But that’s not what happened. Multiple shocks, including a senseless war, have completely changed the economic picture. Far from being temporary, inflation has become more stable.”

She revealed that the IMF’s upcoming World Economic Outlook, to be released next week, lowers growth figures for next year.

This is largely due to the “gloomy global outlook”, as the economy faces more uncertainty, higher volatility, stricter financial conditions, geopolitics, and natural disasters.

“The risk of recession is rising. We estimate that countries that account for about a third of the global economy will experience at least two consecutive quarters of deflation this year or next,” Georgieva said.

“Even when growth is positive, it will feel staggered by shrinking real income and rising prices.”

The International Monetary Fund predicts a global output loss of about $4 trillion between now and 2026, which is equivalent to the size of the German economy – the largest in Europe.

This is a “huge setback for the global economy,” Georgieva said, “things are likely to get worse than get better.”

Georgieva called on policymakers to take measures that help stabilize the economic environment. She warned that the lack of adequate monetary tightening could cause inflation to be deflated and entrenched, requiring larger interest rate increases in the future, which could weaken growth and affect people’s livelihoods.

The “urgent priority” is a fiscal policy that aligns with monetary policy and protects the vulnerable in society, without increasing inflation.

She said increased fiscal spending “will lead to a very arduous and dangerous road” as central banks raise interest rates.

Stressing the need to reduce the risk of growing debt crises, she concluded: “Our global economy is like a ship sailing amid crashing waves. We need all the wisdom we have – for the ship to settle down and go through what’s to come.”