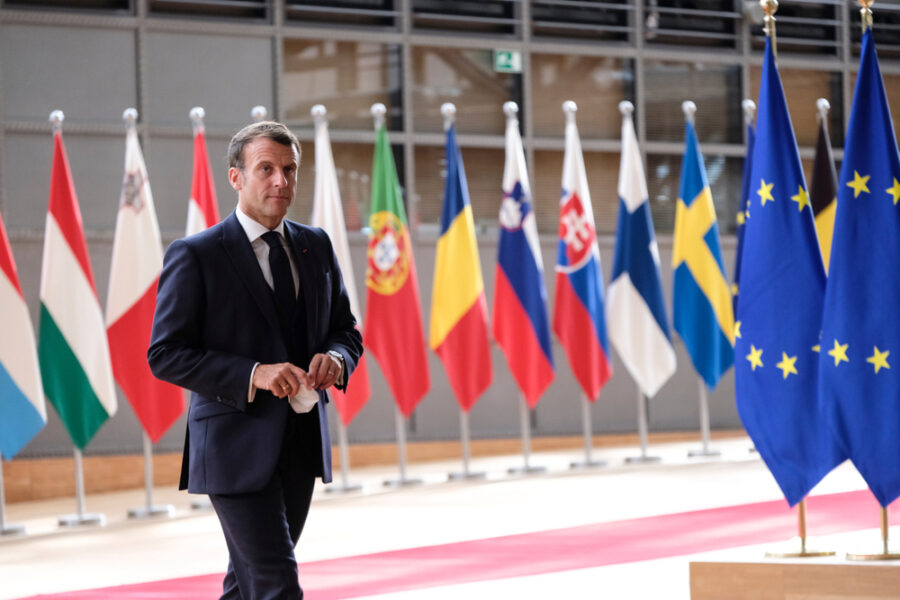 The euro failed to get a boost from pro-EU Emmanuel Macron’s re-election as France’s president, with European stock futures tumbling, as investors’ concerns about global growth overshadowed their relief at the defeat of far-right candidate Marine Le Pen.

French President Emmanuel Macron defeated far-right rival Marine Le Pen by a comfortable margin in Sunday’s election to win a second term and end what would have been a political earthquake.

Macron has leaned on a pro-business and European Union platform, bolstering the European bloc in the midst of the worst security crisis in decades.

The current results are good news for investors who had predicted that Le Pen’s victory would shock markets similar to what happened with the UK’s vote to leave the European Union or the election of Donald Trump in the US.

Macron’s victory comes as France’s economy slowed more than previously expected, with the industry grappling with rising energy costs and worsening supply constraints as a result of Russia’s invasion of Ukraine, according to the French Central Bank’s monthly report.

Investors remain concerned about whether the global economy can withstand the tightening of a number of major central banks, notably the Federal Reserve, slowing Chinese growth due to the Covid lockdown as well as the impact of the ongoing Russo-Ukrainian war.

“Reuters” reported that the pan-Euro Stoxx 50 futures contract fell 1.75 percent in Asian trading on Monday morning, along with a decline in futures contracts in the US and Asian stocks.

The euro, which initially opened higher, fell 0.34 percent against the dollar to $1.07725, approaching a two-year low last week.

Bond markets were already moving ahead of the election, and the yield premium demanded by investors for holding French 10-year bonds against the German European benchmark index – a key gauge of relative risk – fell to a three-week low of around 42 basis points Friday as investors expected Macron to win.

The immediate reaction of the market: satisfaction

Analysts say that while in the medium term there will be some pressure on the secondary bonds, the immediate market reaction will be a relief.

Too much risk for investors in the medium term

But in the medium term, there are a lot of risks for investors.

Seema Shah, chief strategist at Principle Global Investors, said: “For French stocks, we could see a slight rally. But after the sudden reaction, the focus will shift to the European Central Bank and interest rate expectations, and that will be a major driver for European stocks and bonds.

Sources familiar with the views of the European Central Bank told Reuters that ECB officials are keen to end bond purchases at the earliest opportunity and raise interest rates as soon as July.

The focus will also turn to the French parliamentary elections in June. To implement the reforms, the new president will need to secure a parliamentary majority.

Oil prices also fell to their lowest levels in two weeks today, amid growing concerns that the spread of the outbreak of the new Corona virus in China, the largest importer of crude in the world, will hinder demand.