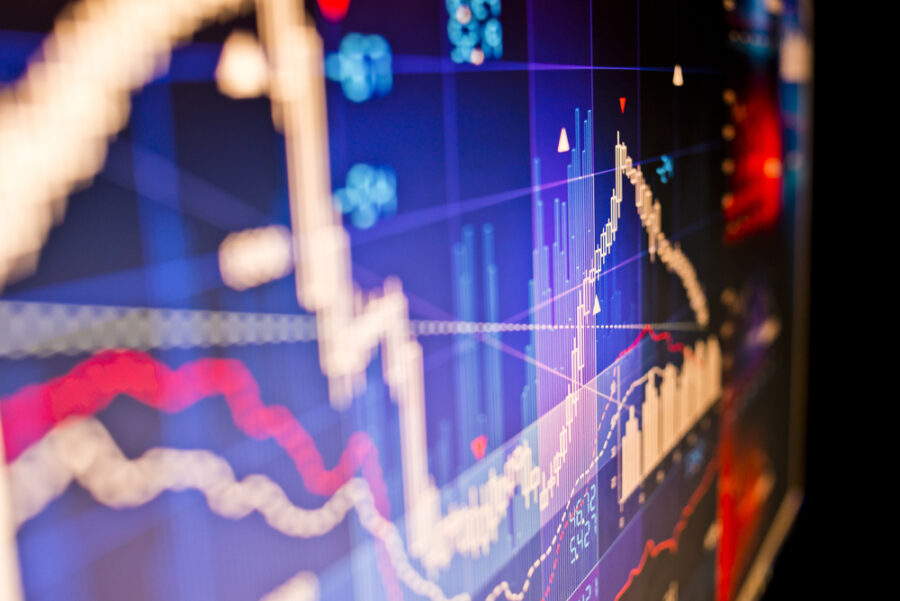 According to the Arab Federation of Capital Markets, stock markets rallied, over the previous week, for a third consecutive session on Friday as investors digested strong tech earnings and markets focused on a possible slowdown in the pace of rate hikes rather than a US recession after data showed its economy shrinking for a second straight quarter. However, US treasury yields fell as investors are realizing that growth prospects are not going to be that great and buying bond yields at this level might be reasonable. On another hand, oil prices rose over the week on tight supply as attention turns to the OPEC+ meeting though OPEC+ sources said the group will consider keeping oil output unchanged for September. In parallel, gold prices bounced off as the US dollar eased and persistent economic recessionary concerns boosted bullion’s safe-haven appeal.

US dollar and Treasury yields retreating amid a shrinking U.S. economy

The yield on the benchmark 10-year Treasury note slipped on Thursday by about 6 basis points to 2.67% and the 2-year yield fell 10 basis points to 2.87% as U.S. government debt prices rose after the preliminary GDP reading for the second quarter showed an economic contraction. In fact, one of the key measures of economic output, gross domestic product adjusted for inflation, fell by a 0.9% annual pace in the second quarter of the year and followed a 1.6% annual contraction in the first three months of the year, meaning that by one common but unofficial definition, the US economy entered a recession just two years after emerging from the latter.

It is worth mentioning that Thursday’s market moves came after the Fed decided to raise interest rates by 75 basis points for a second month in a row and its third this year to combat high inflation, taking its benchmark rate to a range of 2.25%-2.5%. However, Fed Chair Jerome Powell said on Wednesday he did not think the United States was in a recession, based on the strength of the jobs market. US officials acknowledged that consumer spending and business activity have softened even as the labor market continues to show robust gains in recent months, but they also said they remain highly attentive to inflation risks while there will be a point where the Fed starts to slow hikes to assess their impact.

Within this context, the US dollar weakened amid a sharp retreat in Treasury yields as markets continued to bet that the Federal Reserve has less tightening to do with the U.S. economy at risk of recession. As such, the US dollar index, which measures the currency against six top counterparts, dipped to a more than three-week low of 105.7 on Thursday. In parallel, the US dollar touched a low of 133.2 yen on Thursday, the weakest since June 17. Meanwhile, the euro was flat at $1.019 after a see-saw session on Thursday that ultimately ended with little changed. Sterling recorded a high of $1.219, the strongest since June 29, while Aussie reached Thursday its highest since June 17 at $0.7.

In parallel, financial markets have taken the combination of the Fed announcement and the negative US GDP print as confirmation that policymakers will ease off their aggressive monetary tightening cycle before too long. US equities rallied this week as comments by Federal Reserve Chair Jerome Powell led to speculation that rate hikes would begin to slow and eventually turn to rate cuts in 2023. Shares of Amazon and Apple shot up 12% and 3% each after hours after the tech giants reported earnings that beat expectations. On a weekly basis, the Dow Jones Industrial Average rose by 3.0%, the S&P 500 gained 4.3% and the Nasdaq Composite added 4.4%.

Brent prices climbed nearly 5% for the week in its second straight weekly gain, while WTI rose by nearly 3% for the week, recouping the previous week’s losses, on the back of supply concerns and a weaker U.S. dollar as attention turns to what OPEC and allies including Russia agreed at a meeting this week marking the end of their 2020 output reduction pact, though it would be difficult for OPEC+ to boost supply much given that many producers are struggling to meet their production quotas due to a lack of investment in oil fields. As such, Brent crude futures for September settlement, due to expire on Friday, gained $2.9 to trade at $110 a barrel while US West Texas Intermediate (WTI) crude futures advanced to $99.7.

In parallel, natural-gas futures bucked the trend of pullbacks in commodity prices this month and look to finish July with a 50% gain, the second largest monthly percentage rise on record. It is worth mentioning that US gas prices have climbed to their highest seasonal level for 14 years as hot weather and demand from electric generators have coupled with strong exports to Europe to keep inventories below the pre-pandemic average. Russia has been holding back natural-gas supplies in Europe, curbing the flow through the Nord Stream 1 pipeline, leading to a rally in the region’s prices. Natural-gas futures on the New York Mercantile Exchange traded about 50% higher for the month of July, while European benchmark Dutch TTF gas futures have seen a monthly climb of more than 36%.

Gold prices rose over the week as a contraction in the U.S. economy boosted its safe-haven appeal and extended gains driven by a less aggressive tone from the Federal Reserve chairman. Spot gold extended gains and was last up to above $1,775 per ounce helped along by a subsequent slide in the US dollar and US Treasury yields. However, gold prices are poised for a fourth consecutive monthly drop, as an elevated US dollar and aggressive monetary policies from top central banks continued to erode demand for bullion. On another hand, India launched its first international bullion exchange on Friday as the world’s second-biggest consumer of the precious metal tries to bring transparency to the market for the precious metal. India International Bullion Exchange (IIBX) could lead to standard gold pricing in India and make it easier for small bullion dealers and jewelers to trade.

In parallel, July has brought relief to the crypto market which is moving upward as investors are interested in buying back their routine into their favored crypto owing to the recent macro developments. In fact, crypto traders are showing signs of renewed confidence as the early signs of a rebound following a period of sharp declines for the digital assets industry. In detail, cryptocurrency prices surged over the week with Bitcoin trading above the $24,000 mark while the total crypto market capitalization has rebounded to $1.14 trillion from last month’s $762 billion low. On the other hand, Ether, the coin linked to the Ethereum blockchain and the second largest cryptocurrency, reached above $1,700 mark as the network’s merge approaches.