Riyadh Metro on track for completion during H1 2022

Riyadh Metro was a headline grabber before its upcoming launch

Riyadh Metro was a headline grabber before its upcoming launch.

Today, If you ask any Saudi citizen about their wishes for the year 2022, they will answer you on the spot: the end of the pandemic.

But they will also point to the launch of the King Abdullah Financial Center (KAFD), and the opening of the Riyadh Metro.

The city’s metro project will transform Riyadh and make it the economic capital of the entire Middle East.

Riyadh, which generates 50% of the non-oil economy in Saudi Arabia, is a major target for strategic projects for cities within the Saudi Vision 2030.

“All the characteristics that Riyadh possesses are huge potentials to create jobs, establish growth in the economy, bring investments and produce many opportunities.”

Riyadh Metro is a huge infrastructure project and the largest public transport network in the world. It is currently being developed to keep pace with the expected growth of the city.

Matching the growth of Riyadh

The population of Riyadh, which is more than 7.5 million, is expected to rise to about 15 million in 2030.

It is part of the King Abdul Aziz Project for Public Transport in Riyadh, which consists of trains and buses.

Six main metro lines are being established that will traverse the Saudi capital Riyadh from all directions. Trains will reach an estimated speed of 80 kilometers per hour.

The project is expected to contribute to reducing the number of car trips by approximately 250,000 trips per day

It will save the equivalent of 400,000 liters of fuel per day and raise the percentage of public transport use from 5% currently to 20% within 10 years.

This will contribute significantly to reducing harmful emissions. In addition, there is a plan to have 30% of automobiles used in the city become fully electric by 2030.

This huge project was scheduled to run during the third quarter of 2021, but its launch was slightly delayed. It is expected to start receiving passengers in the first quarter of this year.

Which stage are we in this project?

According to what the Royal Commission for the City of Riyadh announced, the construction and civil works of the metro have been completed.

The completion rate of the project reached 92 percent.

The authority’s advisor, Husam Al-Qurashi, explained that more than 80 percent of the work related to railway stations and 350 kilometers of railways across the city is done.

There are more than 180 trains in trial operation reaching an advanced stage. The trains have traveled about 2 million kilometers on all tracks.

It is noteworthy that the Riyadh Metro includes 85 stations, eight of which are main, according to Riyadh Metro. 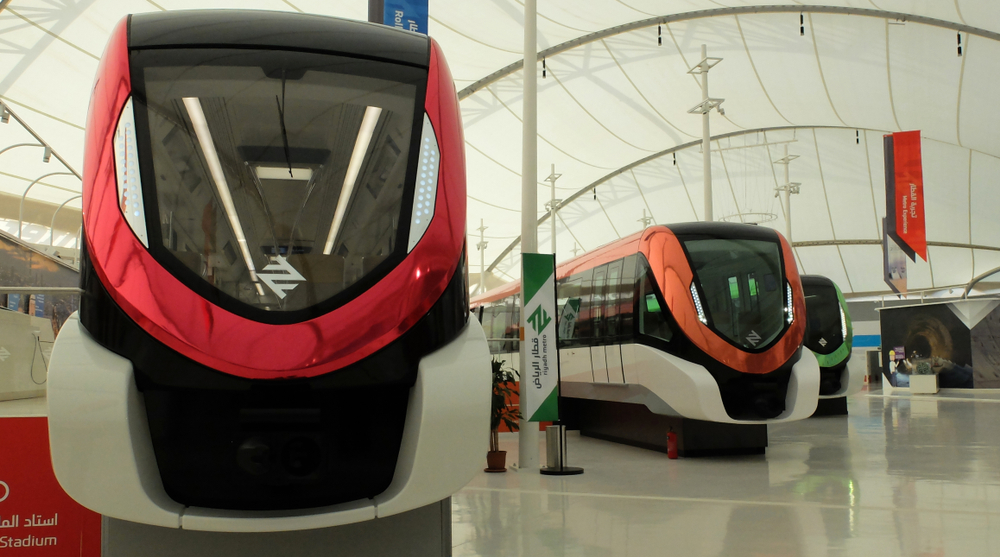 The Riyadh Metro wagons will come in a unified design, with an automatic operating system (without a driver) via remote control.

Metro operators can separate the wagons from the inside to accommodate different categories of passengers while providing a special category for families.

The wagons will also provide communication services, transfer, and exchange information for the passengers.

The metro stations come with an environmentally friendly single architectural style. They are equipped with solar cells that contribute to generating 20% ​​of each station’s needs.

Wi-Fi is available in all stations, and there are also many stations that contain shops, food and coffee places, and other various services.

Jeddah has plans of its own, but Saudis and residents of Riyadh will soon start hearing a greeting welcoming them to Riyadh Metro. The project will surely add an ultramodern image of the city.

Best of all, it will greatly enhance the quality of residents’ lives and the way they engage and connect with the world around them.