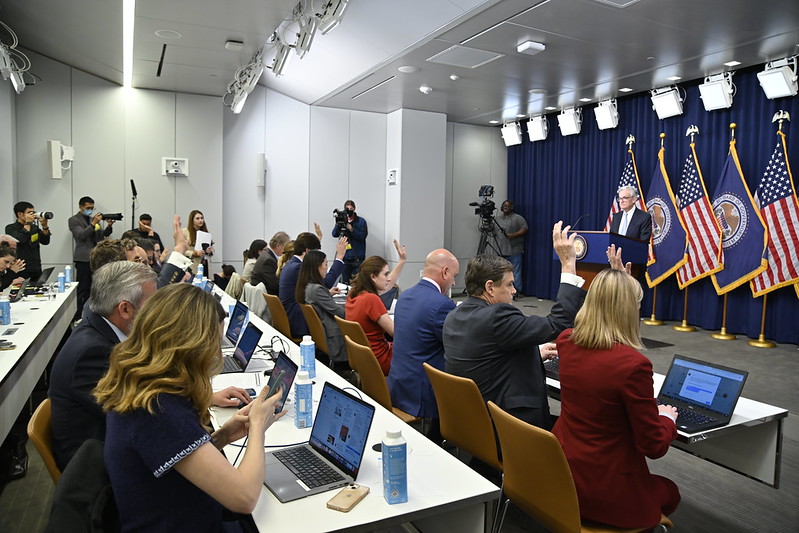 The Federal Reserve (FED) was expected to increase interest rates by 75 basis points. Markets also awaited hints on whether the Fed would give signals of a possible easing of its hawkish policy in the future.

This is what the FED alluded to when it said that future increases in borrowing costs may be less to take into account the consequences of the “cumulative tightening of monetary policy” that it has pursued so far.

This new tone of the monetary policy statement, following the Federal Open Markets Committee (FOMC) meeting, reflects an awareness of the continued negative impact of the Board’s rapid pace of rate hikes, as well as its desire to focus on reaching an appropriate level that would be sufficient to bring inflation back to its target of 3 percent.

Wall Street quickly picked up on this and rose slightly before closing sharply lower, as Federal Reserve Chairman  Jerome Powell’s comments dashed initial optimism about the board’s policy statement. Powell said in a brief statement after a meeting that it was “too early” to consider stopping the rate hike, which pushed US stocks sharply down.

With this increase, interest rates reached a 15-year high, within a margin of 3. 75 and 4 percent.

Powell said the interest rate could rise to higher levels than he thought, but officials may begin to slow down the pace of increases at their meeting scheduled for December.

He added: “New data from our last meeting indicates that the maximum level of interest rate will be higher than what we have  expected before.”

Powell said it would be appropriate if the pace of increases was slowed down “at some point …  This moment will come, and that may be soon, by the next meeting, or the one that follows. No decision has yet been made,” he said, adding that it was “too early” to consider freezing interest rates.

A statement published after a two-day meeting said the board of governors of the financial authority considered that “an additional hike in interest rates would be appropriate”.

They noted that the effects of the rate hike measures approved since March must be taken into account in order to arrive at a pattern of rate hikes at future meetings.

This could be an indication that the pace of rate hikes in the coming months will be slower.

In a report released two weeks ago, the FED said the economic outlook was becoming “more pessimistic” in the United States amid growing fears of weak demand, citing rising inflation and interest rates.

Read more: Fed’s Board discusses fears of a US recession

In contrast, the dollar fell broadly against major currencies.

As every time, most  Gulf central banks have announced that they are raising key interest rates.

UAE’s central bank will raise its base interest rate to 3.9 percent from Thursday.