Saudi and Egypt agree to cooperate in electricity and renewable energy 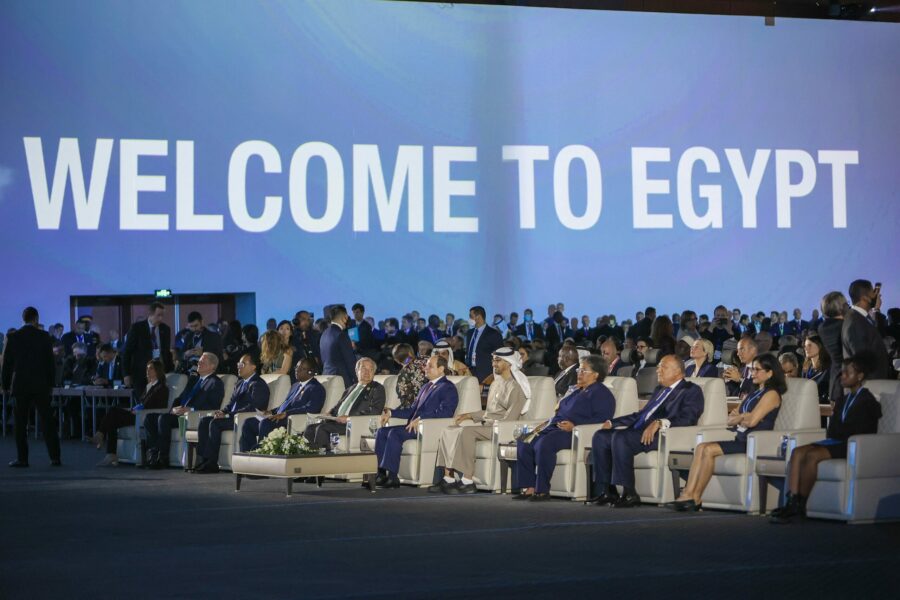 During the official opening of COP27

The United Nations Climate Change Conference (COP 27) currently taking place in Egypt has begun to show harmony on Monday. The divisive issue of loss and damage – that is, rich countries must pay compensation to poor countries for the damage caused by emissions – was placed on the agenda of the summit free of heated arguments.

World leaders have arrived. UN Secretary-General Antonio Guterres opened with an intense warning about the many dangers climate change places on humanity.

Guterres said at the opening ceremony: “We are in a struggle for our lives… and we’re losing. Greenhouse gas emissions continue to grow. Global temperatures continue to rise. Our planet is fast approaching tipping points that will make climate chaos irreversible.”

Speeches by the leaders of the countries continued to call for working hard to protect the world from the effects of climate change. 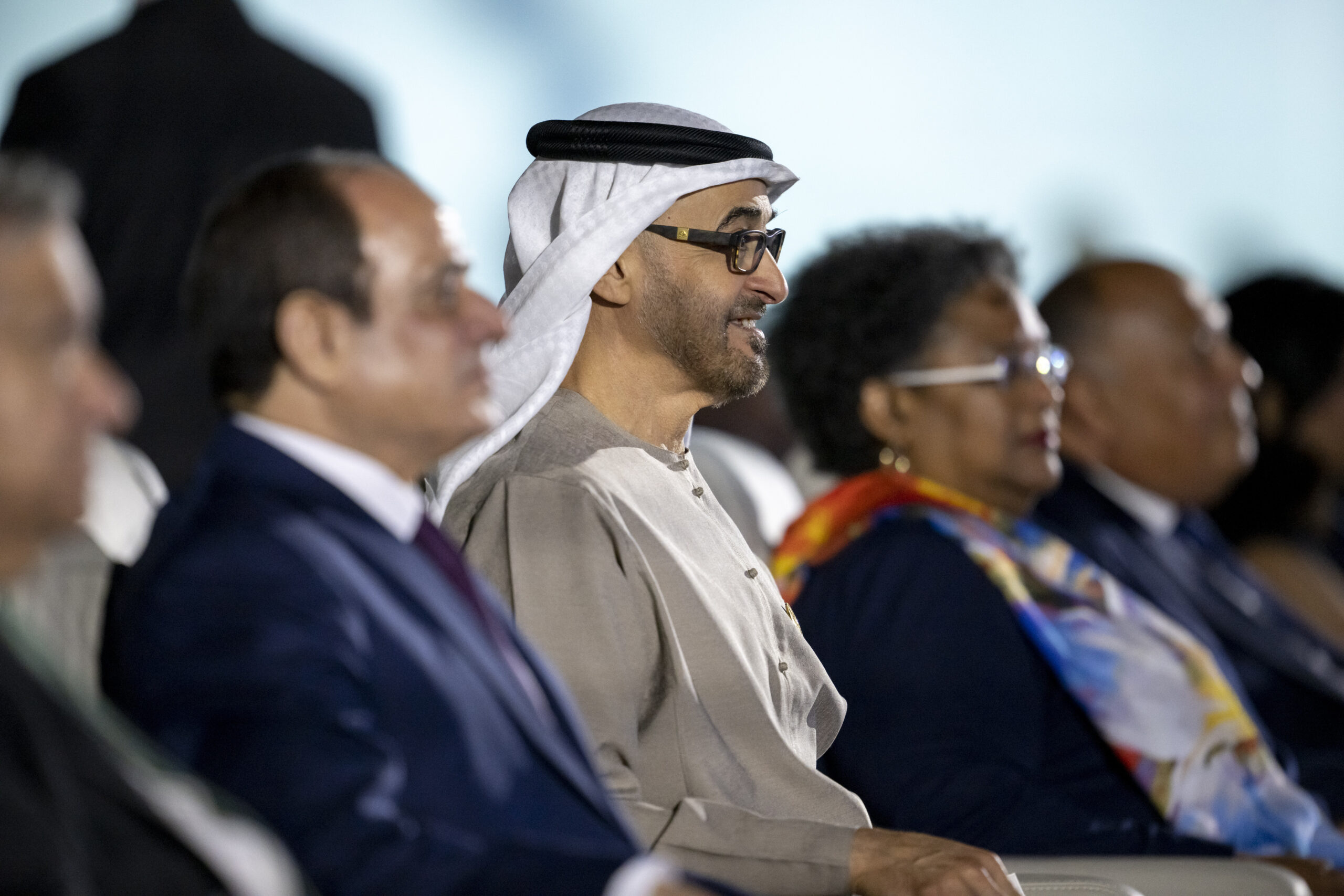 Despite the importance of Monday’s speeches, which confirm that countries have put the issue of climate at the top of their priorities, what happened on the sidelines of the conference was very important because it drew a road map for combating climate change.

On the sidelines of the conference, the Green Middle East Initiative Summit was held, which stressed the importance of joint collective action and mobilizing the necessary funding for the initiative in order to achieve the desired goals.

It is worth mentioning that the “Green Middle East Initiative” came within the framework of “Saudi Vision 2030” and confirms the Kingdom’s commitment to international sustainability efforts, and contributes to increasing the region’s capabilities to protect the planet through the development of an ambitious roadmap with clear parameters that work to achieve all global goals. 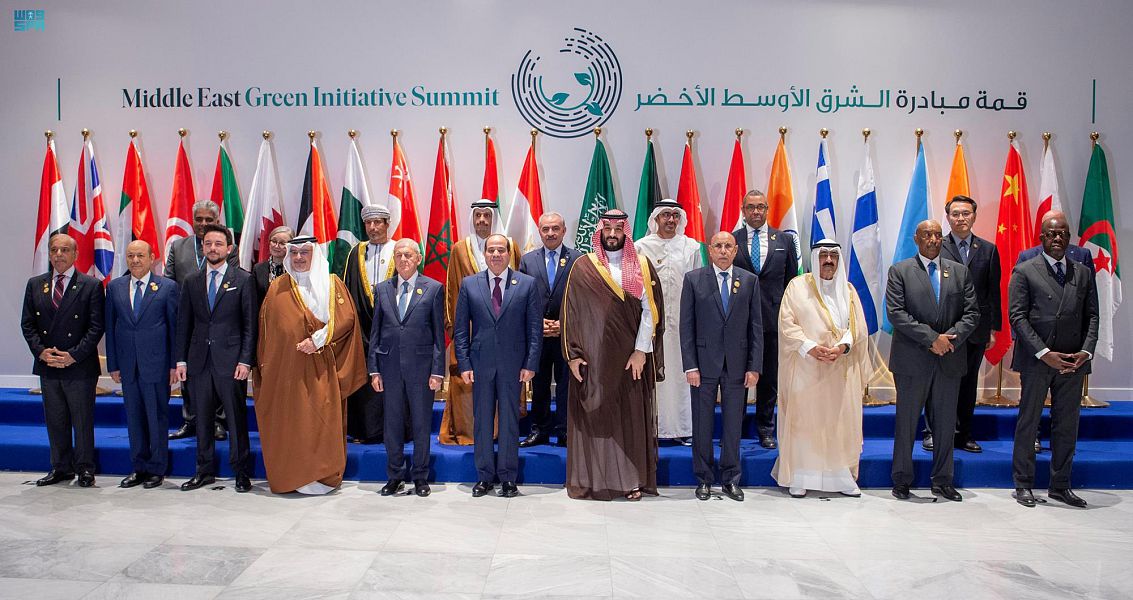 The statement issued by the summit in its second edition, chaired by Saudi Arabia and Egypt, said that the leaders appreciated the Kingdom’s efforts in preserving the environment and reducing the effects of climate change, in particular, the initiatives of Prince Mohammed bin Salman, “Green Saudi Arabia” and “Green Middle East”, for the positive impact they will have on the environment in the region and the world, improve the quality of life, and meet the challenges of climate change.

The leaders pointed out that the initiative will contribute to accelerating the achievement of the Sustainable Development Goals 2030, and providing prosperity for the peoples of the Member States, noting the importance of realizing climate and environmental goals, and committing to the relevant international agreements adopted by the United Nations in a way that contributes to the attainment of its goals and the Organization’s convening of the restoration of ecosystems, and the determination to achieve integration and close coordination among Member States, and invest this in raising their collective capacity in facing the challenges of climate change.

They affirmed the compliance of Member States with the initiative to implement their commitments within the framework of the Paris Agreement and to take the necessary action to account for the average global warming in accordance with the levels established by the Agreement.

Saudi Crown Prince Mohammed bin Salman announced in a speech during this summit that the Kingdom will host the  “Green Middle East” initiative and contribute $2.5 billion in support of the projects of the initiative and the budget of its General Secretariat for the next ten years.

On the sidelines of COP27, there were also alliances that should be recognized. The United States and Norway have together launched a new global initiative to reduce greenhouse gas emissions in the shipping sector.

The two spurred governments, ports, and companies to reduce greenhouse gas emissions from the shipping sector and align with the Paris Agreement’s goal of limiting temperature rise to 1.5 degrees Celsius.

Also launched was an “International Coalition to Withstand Drought,” which is affecting an increasing number of regions of the world due to climate warming.

Under the auspices of Senegal and Spain, the alliance will bring together more than 25 countries and 20 bodies with the aim to improve advanced responses rather than merely emergency responses.

The new alliance will benefit from seed funding of €5 million provided by Spain to launch the project and to garner additional support, particularly a project by Kenyan President William Ruto to plant 5 billion trees in the next 5 years and 10 billion over 10 years.

The Saudi and Egyptian governments also signed a memorandum of understanding for cooperation between the two countries in the fields of electricity, renewable energy, and clean hydrogen, in pursuit of achieving their common aspirations in these fields.

The MoU aims to enhance cooperation in the production and export of electricity from renewable energy, clean hydrogen transport, and electrical interconnection, as well as encourage digital transformation, innovation, cybersecurity, and artificial intelligence, in addition to developing qualitative partnerships between the two countries, and localizing materials, products, services, supply chains, and their technologies.

For its part, the United Nations has unveiled a plan of action worth more than $3 billion so that within five years the entire world will enjoy protection from weather disasters through an early warning network.

Developing countries need to work with investors, rich countries, and development banks to obtain the trillion-dollar external financing a year that will be required by 2030 for emerging markets and developing countries other than China, to work to avoid the negative effects of climate change by the end of the decade, a report said Tuesday.

Funding is needed to reduce emissions, enhance resilience, deal with damage from climate change and restore nature and land, the report said.

The total annual investment requirements of developing countries will reach $2.4 trillion by 2030, half of which is from external financing and the rest from public and private sources in those countries, it said.

The report said the current investment was about $500 million. The largest increase must come from the private sector, both domestic and foreign, while annual flows from development banks had to be tripled.